… coming back from shooting the peaks and other areas on the plateau on Saturday, I was greeted by a very low and heavy cloud bank racing across the Verde Valley from SW to NE and the leading edges of the cloud bank were a marvelous collection of very fine and well defined cloud tendrils. There were no holes in the cloud bank so I am glad I got back when I did . I dove below the clouds on the lower right side of the photo which is the top of Long Canyon. On the far left of the image is Oak Creek Canyon and Wilson Mountain is on the very left side of the image with a little dusting of snow on it. Center left below the cloud layer is the gap between the two canyons and about seven miles just to the right of center under the clouds is the Sedona airport which is where I was headed. The closer line of mountains above the cloud bank is Mingus Mountain and whatever they call the rest of it. Above Mingus and in the distance is Towers Mountain in the Bradshaw Mountains … Crown King is just below it. 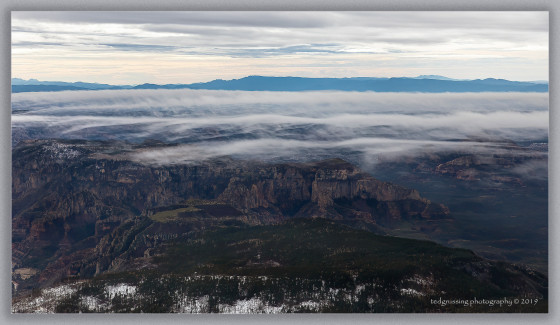 I had planned on shooting a number of the volcanic cones east of the SF Peaks and as I was heading east on the north side of the peaks at 12,000’,  I noticed the winds were pretty high … around 60kts … I have flown in that mess on the lee side of the peaks before, but there was no compelling reason to go there, so I turned back to the west; my ground speed went from 116 kts to 52 kts when I turned around. Fun stuff

Today was a day in which I cannot think of a single thing that I did … One and I enjoyed the rainy weather watching a few YouTube videos on photographic techniques, and the Blizzard of ’49 that swept through Wyoming and much of the central part of the country; an amazing video to watch. The top video on this link is that storm, and as you will see there are many more blizzards going back to the 18th century that have YouTube videos. https://www.youtube.com/results?search_query=blizzard+of+49+documentary . If you prefer videos on heat and drought they have those too: https://www.youtube.com/results?search_query=dust+bowl+videos . Wikipedia has a list of severe blizzards going back into the 17th century  and there were some doozies: https://en.wikipedia.org/wiki/Blizzard . Corky and I left Minnesota in 1967 because we had two winters in a row when the snow drifted up to the eves of our home and I had to go out a window one time because the doors were drifted over … the beaches in Southern California were a wonderful change.

Severe weather has been happening since the earth formed and will continue to do so … that is life on planet earth, this marvelous little place we call home and which occupies a mere three millionths of one percent of our solar system mass … our self-importance more than makes up for the disparity.

Into another week and I’m hoping to get caught up on my email correspondence this week, so please be patient … I do try.

Have a beautiful day and smile … we’re still here.