… I got this shot of a Great Egret a few days ago down at the ponds; saw him there again yesterday, but didn’t get a good shot … so it goes! This is the first one I have seen down there, but friends tell me that they do frequent the Verde Valley. I love hunting for wildlife and getting the action shots; shots where they are just standing or perched are okay, but it the action that really attracts me to them. Took this shot with the Canon 1D-X, 100/400mm lens, ISO 400, f5.6, 1/2000th and spot focus using al servo hi speed shooting raw format. I shoot with the images recorded to both cards in the camera which is a just in case scenario if one card goes bad. 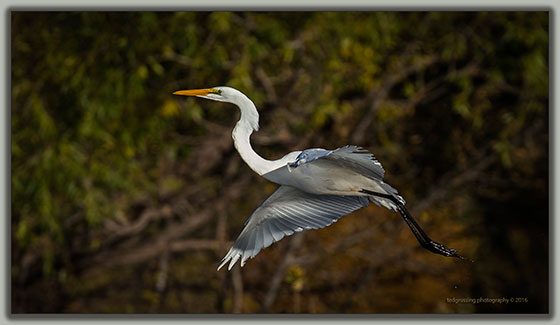 Clear skies in the morning and I think a lot of snow accumulated on the peaks so it will be a flight up there in the morning and see how it looks … maybe there will be snow on the other peaks and volcanic cones too. Ten hours and I’ll know … possible there will be some low clouds too with the peaks protruding above them … hopes for all kinds of good things and you will be getting the best of the best tomorrow night.

Lots of inside work today … One was not thrilled with the cool wet outside and spent less than ten minutes out there this afternoon.

Time to wrap it … hope you had a wonderful day too and that tomorrow will be a repeat … breathing, smiling, friends and family and all the other good stuff.