… on the way back from Cottonwood this afternoon I stopped at the ponds to see if anything was there … not much, but got several Great Blue Herons taking off, in flight and landing … I like this shot of a Great Blue sticking a landing after a flight to get away from me. He actually took a couple of steps after this frame, but not much different than a gymnast dismounting, hitting a good landing, but whoops the momentum just makes another step or two a necessity. His wings are totally spread out and cupped for maximum air braking. … beautiful creatures. 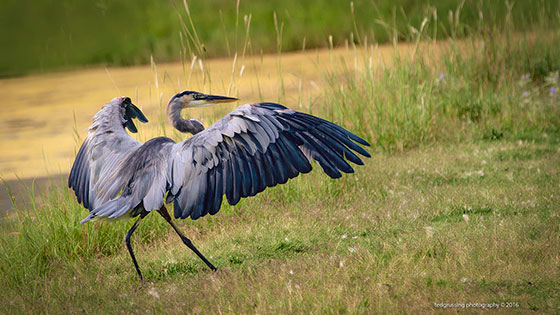 Flying early in the morning again and going for some more land and rock patterns on this flight, but will leave the 400mm at home. Time to do a wrap of the day and it was a very good one, hope yours was too. Enjoy the day and give thanks for living it … now tomorrow becomes today … keep breathing :+)