I had intended to get an early start this morning, but life just continued to happen and things demanded attention so it was a while before I got out the door. Winds aloft at the peaks were projected to be around 31 kts from the west which translates into some very good orographic lift on the windward side of the mountain, but not so pretty on the other side … something called rotors were going to be in abundance on the lee side and that is where I had to be to get good shots of Lockett Meadow and the major color areas. Rotor is nothing new, but the challenge was going to be to keep the Lambada  relatively stable to get the shots I wanted. I had a nice flight up to the peaks and as expected I started flying through air saturated with rotors … it is nice to not be disappointed :+) Anyhow I got some very nice shots including the one attached hereto (good legal word). 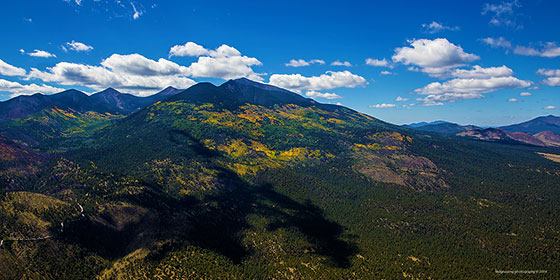 You can see a partial rotor cloud on the upper left side of the image and the shadow of it on the side of the mountain just left of the color, left of center in the image. Lockett Meadow in the caldera has a lot of color now and the whole north facing slope is turning color as the aspens explode with yellow and gold. The west side of the peaks also has the color starting and in a few days it should have a substantial percentage of color. I decided to fly at relatively low altitude today to get shots looking up the peaks  instead of down on them. At 9500’ MSL I was about a thousand feet above the terrain I was flying over. On the right side of the photo you can see Kendrick Peak and working left, Sitgreaves Mountain and I think Bill Williams Mountain as a silhouette behind Sitgreaves. I think all named peaks in the San Francisco Peaks are visible and other than Humphreys and Agassiz I don’t know what the others are.

After landing back at Sedona it was over to the Mary D. Fisher Theater and Andrea and I ran the new power point presentation we are going to be presenting  on Saturday at 1:30 … it looks terrific if I do say so myself and there are some pretty amazing shots. Also many of the shots should evoke questions and we’re looking forward to having the discussion. Please join us and you can buy tickets at: http://prod5.agileticketing.net/WebSales/pages/info.aspx?evtinfo=31411~e8932fbb-a9ae-4437-a638-ff0cf1793527&

Thence it was over to my friend John’s place for our usual sugar free vanilla latte from New York Bagel. John also asked me if I would plug the upcoming fund raiser they are having I think next week. John also asked me to use his last name which is Soderberg as there are so many Johns’ out there people may not know who I am talking about … I started laughing … loudly … so be it know that John Soderberg is not just another of the many Johns’ out there. Talented Artist/Sculptor, benefactor to many charities including the one I mentioned last week and do so again here. If it is a question between buying one of my calendars and making a donation to John Soderberg’ s favorite charity give it to his charity as he feeds and provides for kids.

Rancho Feliz Charitable Foundation and also check out John SODERBERG’S (not just another John)  website at http://Johnsoderberg.com some neat stuff. Does this work for you John? Soderberg … Smiles

Some friends over late afternoon, a walk, dinner an unexpected and delightful visit by another friend and then an evening of working on photos and stuff.  Time to wrap the day and hope yours was as good as mine and better. Hopefully I can get up to the peaks and get a flight into the caldera tomorrow morning. Peak color is coming before too long and I want to get it. I got another one of Max Ehrmann’s books and am finding some work I have not read before and the quote tonight is a new excerpt which I like and hope you do too .. a little haunting, but good.

I saw or thought I saw the figure of a woman standing in the dim light …
“What are you writing?”
“A story of perfect love”, I answered
“Lay down your pen and live with me the story you are writing”, she said
“I am ready!” I cried, and arising, I started toward her; but there was nothing there.
— Max Ehrmann