Today’s Photo from Ted Grussing Photography:
So much beauty

… and a bunch of professional photographers shared some of our best tonight and consumed far too many yummy Christmas cookies, brownies, red velvet cakes and more. The combination of beautiful images, food and great company was just flat out awesome. I took this shot of a Hollyhock that was in front of Chic Salon back in the spring of 2009 … It was raining and Corky was getting her hair done … I don’t see many Hollyhocks other places so likely it will be back there sometime to shoot more and it’ll be fun to say hi to everyone there again. 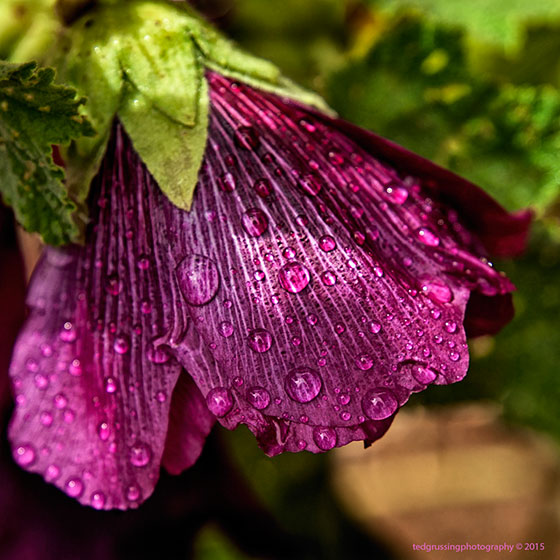 Off to Phoenix with engine and airplane parts from the Lambada later this morning, get the SUV serviced, Trader Joes and AJ’s run and back in time for dinner at L’auberge in the evening. The Hilton is having a party New Year’s Eve if you would like to go out and have a blast. Anthony will be performing the Legends of Guitar show beginning around 7:45P and after the dinner show will be DJ for the rest of the evening … morning? Good food, drinks and dancing. Twenty bucks gets you into the show which is being held in the large ballroom.

Have a wonderful day today; enjoy the beauty that surrounds you and fills you with joy … smile a lot too and you will make the day of those you meet. A tiny little planet … beauty beyond belief … permeated with love.