… nope, not another hawk eats quail shot or bobcat eats squirrel shot … just a simple squirrel in the peach tree out back having an afternoon snack mid-September of this year. I like the way he has secured himself with the claws on his back feet hanging on to a branch, whilst he holds the peach with his front feet and munches on the sweet fruit. 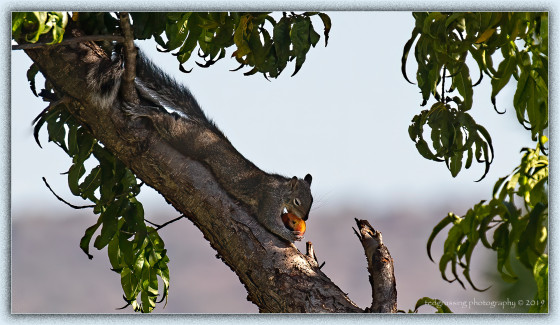 Nature continues to amaze me and especially since it doesn’t really depend on us for anything and aside from soiling our sandbox a bit, there isn’t much effect we have on planet earth. When those pushing the day in and day out burning of forests to restore fire, find that they have once again got it wrong, perhaps we will get a breathable atmosphere again. In the interim we adopt and do what we can to survive. Snack time … what a great idea!

Have a beautiful day today … smile and keep breathing.

Work is about more than making a living, as vital as that is.
It’s fundamental to human dignity, to our sense of self-worth as useful, independent, free people.
— William J. Clinton