… through mirror like water on Watkins Lake and heading into the narrow stretch of water just to the right of the large granite boulder on the left side of the image. Narrow little water ways that go back into the boulders are one of the main attractions of Watkins Lake for me and as oft as not there will be some wildlife back in there. A few of the waterways are not more than ten feet or so wide and open into meadows not visible from the main lake. Hoping for some good monsoons in the near future to bring the lakes level up again. It is a special lake with the boulders on one end of the lake and a shallow portion and meadow on the other … lots of waterfowl and life too. Landscape photography is a rarity for me, but sometimes the beauty is just so intense I need to capture and save it … for evenings like this. 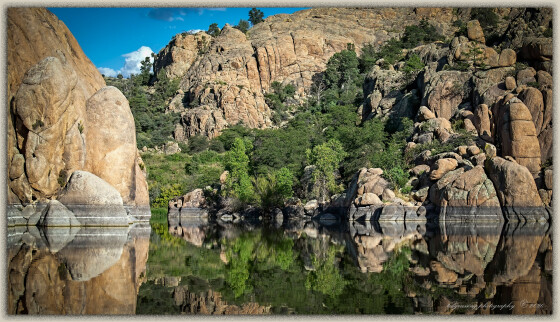 Into my weekend and the plan is to be back Monday the 6th … have a joyous holiday and celebrate again the incredible gift of freedom that the founding fathers gave us and remember the price that each of them committed to by signing that most beautiful document of Independence … no wonder we erected monuments to celebrate the memories of these brave individuals who set in motion the greatest experiment in freedom and equality known to man … The United States of America, a country that has done more to advance the rights of all individuals than any other nation in the history of mankind and the country that has done more to help people all over the world than any other country.

Keep breathing and believing … life is good and so are the vast majority of people … everywhere!

Though I know I shall sometime no more open
my eyes to the night or day.
I am one who looks at the stars when unchained from
the workbench at nightfall.
They are a sign that I am not ephemeral, nor you, nor
you, whoever you are.
The dawn comes and the dark and the sign sparkling
in the brooding night forever and forever.
Max Ehrmann