Today’s Photo from Ted Grussing Photography:
She makes me smile

… One of the fun things with watching and shooting ducks is when they splash around in the water, bathing or just shaking things out for the heck of it … the resulting sprays of water flying into the air and unusual body positions are fun to watch … and they bring  a smile to my face.  So here is a hen mallard on her back and just getting into whatever it is she is doing. 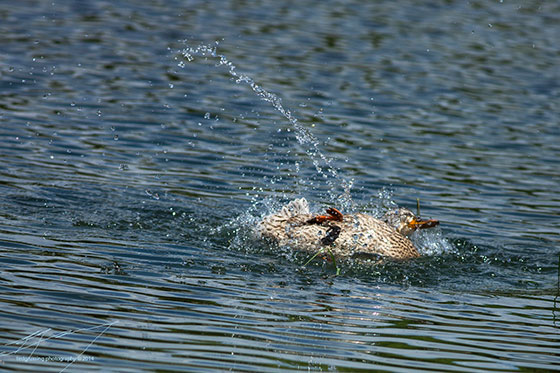 Ripping through photographs all day and am getting into a rhythm; more of the same tomorrow and a minimum of a few hours a week until I get it done. Given up on trying to determine what is on the color negatives (our old ones – pre digital) and am sending some in for scanning and the rest go to the girls and they can toss them or scan them. Wish I would have done all my shooting with color slide film but a wee bit late to go back and rethink that decision. The thing I have found is that many of the images have importance to me, likely the girls, but beyond that, who cares? No one. I am still the one who tosses, Corky was the saver. My choice now :+) Deleted almost a thousand images today and hope to do the same tomorrow and keep it rolling.

Hope you had a good day too and that this day will exceed expectations. It really is a neat planet we live on and we are blessed