… I have had numerous inquires as to how my resident feline is doing, so it seemed a good idea to send a photo of her out tonight. I took this shot a couple of days ago on her daily supervised outing and she is present as the huntress that she is. She missed on a couple of lizards, but then again she is a little rusty as they are just beginning to make their appearance again this Spring. Lithe, sleek, well groomed and lucky for the lizards she does not need them as food … a miss is okay. 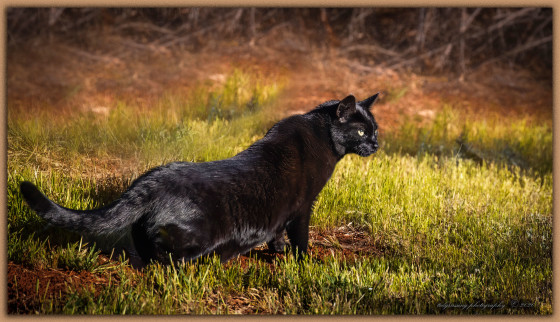 Trying to catch up on emails … maybe by the weekend. Wax carving tomorrow, an opal or two and some relaxation, whatever that is. Have a beautiful day, keep breathing and smile … life is good and so are most people.

Back on Monday … at least that is the plan.

Better should I have known, for the things that are
inarticulate cannot be made articulate, and there is no
language of the voice of the luminous worlds and the
love of the night.
— Max Ehrmann