… Phalaropes are a small bird in the Sandpiper family that breed in the Arctic and migrate thousands of miles, and the Western ones spend their winters at sea off the coast of Peru and other South American countries. This little creature which spends so much of its time at sea is only about six inches long. Eric and I encountered two of these amazing creatures on Watson Lake Friday afternoon and they had absolutely no fear of us and we spent about twenty minutes within ten to fifteen feet of them near the middle of the lake. Other than the breeding season it seems they spend most of their lives at sea or on lakes during the migration. I am in absolute awe of these little creatures and I took this shot of one as he was taking to flight after tiring of our company. The reflections on the lake were pretty amazing too. 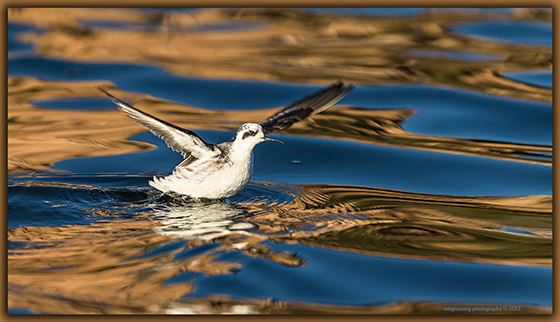 With a name like this creature has, there was no choice; I had to bifurcate the name with the first part in the Subject panel. During the breeding season it does have a red neck which reverts to this afterwards.

I had a nice flight to the peaks late afternoon and for the most part it is way past peak color and entire groves have been stripped of their leaves. Probably take an early morning flight up to check out the inner basin in the morning and then Tuesday it will be back to Watson Lake as the migration is really in full swing now. Got some great shots of Caspian Terns, Pintails, Cormorants Canada Geese and more … and the foliage on the shore and rock islands is beginning to turn color. Life is so amazing and there are so many varieties of it, just so cool to be here and get to experience it.

Have a beautiful day and take the time each day to look for a little beauty around you … it is everywhere, all you need to do is look for it … and smile.