Saturday Sus and I headed down to Pescadero State Beach, turned inland to do a hike in the  wildlife preserve … my intent was to get some good photos of Herons and shorebirds in the wetlands area. We hiked about a mile into the park and along the estuaries and marshlands … it was a very nice trek and the scenery was beautiful but there was a near absolute dearth of wildlife. In total we saw one bird and two insects. The bird was (and I presume still is) a Kingfisher and about 500 feet was as close as I could get to him. It was the only shot I took or had the opportunity to shoot in the preserve. So there you have it, this photo is brought to you because of its rarity … only one shot on the outing … not the greatest, but at least I got a shot to remember the outing ! 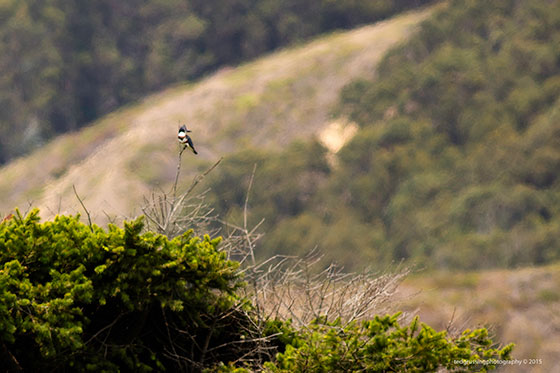 Afterwards we returned home to HMB and I got some great shots of geese on the golf course and a few other birds. Dinner and then to the South Coast Repertory Theater for a performance of Jesus Christ Super Star … it was a very fine performance and I nice way to cap the day. Sunday Ted and I went down to Pigeon Point Lighthouse and more on that tomorrow night along with a great photo from the visit. They have a Hostel there and it is booked about six months in advance; I am definitely going to be booking a few days there this winter … the sound of the waves crashing on the rocks below the cottages is amazing and the thought of going to sleep and waking to that sound is simply irresistible. You can check it out at: http://www.norcalhostels.org//pigeon/

A terrific day … somewhat quiet, but enjoyable and some nice thunderstorms rolled through the area … writing the sole activity planned for tomorrow …