… I made my way back to Sedona after  a beautiful flight with no purpose other than to escape the bounds of earth and ply the open pathways of the sky. After an hour or so I turned the engine off and enjoyed a nice sled ride the last twelve miles back to Sedona. The airport is on a mesa center left about 600 feet above the town and West Sedona and part of uptown are on the left, the chapel area just to the right of the airport and far right the Village of Oak Creek where I live. Jacks Canyon and Wood Canyon can be seen to the right  (east) of the village. Cathedral Rock is just above my feathered and motionless propeller and further to the right castle Rock and above that Courthouse Rock. Schnebly Hill Road winds up from just above the north end of the airport through the valley between the rocks. Mormon Mountain is horizon left. Red Rock Crossing is just below and right of Cathedral Rock. 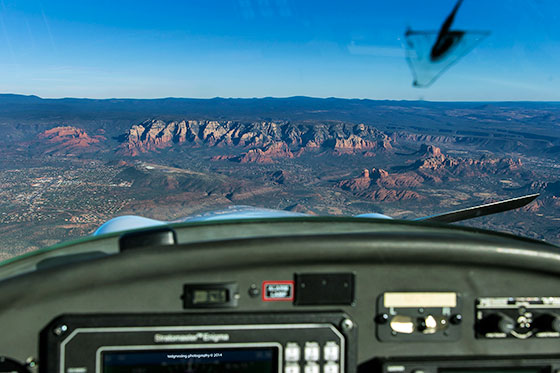 So it was a nice way to spend the afternoon; I had between 30 and 40kt winds at 10,000’ which slowed me down a bit going into it, but quick passage when I turned SE.

Wishing you and yours a wonderful Thanksgiving and hope you find nothing but joy within yourself and family and friends … I’m on my way to San Francisco later this morning and my youngest daughter and her girls have flown into the bay area too and together with Ted’s family, Corky’s brother and his wife we’ll all be spending a nice holiday together. So this will be it for this week, but I’ll be back in your inbox Monday morning.

Cheers … smiles and share the joy you find within your being.