… the final glide back to Sedona on silent wings … no sound of an engine, only the slight whoosh of air disturbed as I pass overhead. The light was quiet too with almost pastel colors and light … a sight I can spend time looking at, remembering where I have been and planning the landing at Sedona … the airport is just above the nose in this photo. 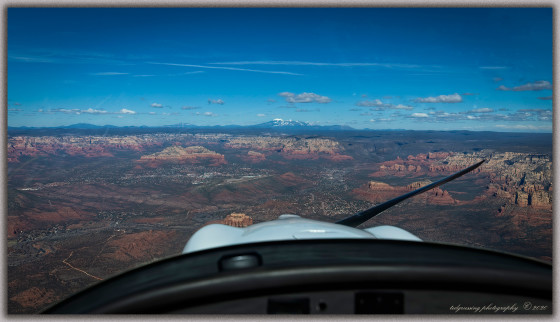 Just above the cowling left of the nose is Cathedral Rock, the airport above that. I am roughly four nautical miles from the airport at 8,400′ above sea level and about 4,000′ above the airport … Mariah can turn that into around 22 miles in calm air, but more realistically 18 to 20 miles. So, a nice sled ride around the area before coming in for the landing..

A good link to accurate modeling of the CV-19 virus for the USA as a whole and each state is: https://covid19.healthdata.org/ and I believe it is updated daily. Last Friday when I got the link it was predicting 1,397 CV-19 deaths in Arizona and tonight it is predicting a total of 570 deaths through August 4th. A much better outcome.

To date in the 2019/2020 flu season in Arizona the influenza strains going around this year are responsible for over 1600 deaths … higher by August 4th for sure, but the death rate per week has been dropping precipitously the past several weeks since we have been implementing social distance and staying home. Good things do happen and perhaps there will be beneficial habits we will acquire and carry forward.