Today’s Photo from Ted Grussing Photography:
No so pretty…

… the USFS is back to burning in an effort to save the forest … dire warnings about catastrophic fires if they don’t do the prescribed burns and many studies justifying the need for them to restore the forest that the selfsame USFS has mismanaged for the past hundred years … now we are to believe them that they have it right this time around. 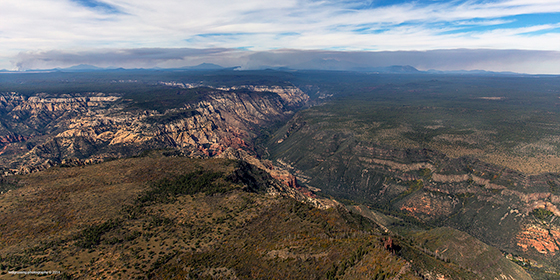 There are numerous studies that demonstrate the harm that smoke does to humans … think those with respiratory issues, new born babies who are having their lungs polluted by this very harmful smoke … athletes  … just ordinary people who have to go about their everyday business and breathe in this airborne cesspool. The same agency which is approving these burns is the one which prohibits you from smoking a cigarette on the outdoor patio of a restaurant in Flagstaff when they have polluted the air so that it is like this … make sense to you? It doesn’t to me. The fires they set last week near Bill Williams Mountain continue to smolder and put smoke into the air (off to the left and not in this photograph) and the new fire on the left of this photograph is SW of Sitgreaves Mountain which they had burning as a managed fire for much of the summer; Sitgreaves is the first mountain on the horizon on the left … then Kendrick and pretty well buried by a smoke screen the San Francisco Peaks where I got so many beautiful shots last week and before. Mt. Elden is visible on the right through a hole in the smoke. The Verde Valley is pretty well filled with smoke too; you can see the outlines of Mingus, but no detail as it is whited out by the smoke haze which settles everywhere.

The smoke is marginally venting and traveling to the East to precipitate out on other folks as well as here. Because the conditions indicated venting I suppose they approved the fire … sad reality is that as the initial smoke vents upward and begins to travel downwind it blocks the sun from the ground and this in turn cools the earth and prevents surface heating which gives rise to the venting conditions and the smoke begins to precipitate out instead of going up traveling and coming down on our neighbors to the east or wherever it was hoped it would go. On the right side of the image you can see what was the early part of the smoke from the fire as it mostly is up and out of there, but then as you work your way back to the left towards the source of the smoke you can see how it is settling on the earth and not venting … the surface heating is gone and there are no more rising columns of air. Same with the fire on the left side of the image and after about ten miles it is beginning to precipitate out.

This is common knowledge among soaring pilots who go cross country or race. One time I flew my high performance sailplane from Turf Soaring in Phoenix up to the South Rim and while up there, clouds moved in further south, the earth cooled, the thermals stopped and I ended up landing in an alfalfa field in Peeples Valley a few miles north of Yarnell. Just the way things work … so if you are relying on surface heating to produce thermal conditions to vent smoke it will only work for a little while and then the smoke blocks the sun, the earth cools and the smoke drops to the ground … that is what you see in this photo and I see every time I fly and they are burning.

In the foreground Oak Creek Canyon wends its way from right to left and upwards. West Fork branches out to the left near the top of Oak Creek Canyon and I am over Wilson Mountain which is the green flat top up to about the middle of the photograph.

It was not like this when we moved here and it is unlikely we would have moved here had it been. If you are considering a trip to visit Sedona, Flagstaff, the Grand Canyon or other areas up here I would suggest you check with the USFS to see if they will be conducting Prescribed burns during your visit … I would respectfully suggest somewhere else to visit during burns unless you miss the good old days in the LA Basin which is now normally better than this. I do not understand why the Tourism Bureau of Arizona is not all over this, nor do I understand the Arizona Department of Air Quality permitting this. More new fires on tap to be started tomorrow.

It was a wonderful day and it is good that we can voice our opinions … to my mind there is not a single tree or forest that is more important than the health of a single human being. Find another way!!!

Share your joy, smile and contact the EPA … into the weekend and back Monday morning … have fun and breathe shallowly :+)

Many fears are born of fatigue and loneliness.
Beyond a wholesome discipline, be gentle with yourself.
— Max Ehrmann