… been going through the thousands of aerial shots that I have not looked at other when I first uploaded them and culled the shots I did not want to keep … that is running into years now and I am finding a lot of shots better than what I have previously sent out.

The photograph above was taken from about three miles south of the confluence of the Verde River and Sycamore Creek and from an altitude of something over 10,000′ looking towards the north. Starting at the bottom and working up you have the Verde River flowing from left to right across the photo and right of center Sycamore Creek is flowing down from the north and joining the Verde river where the two meet. On the right bank, on top you can see the parking lot and the road leading into it from the right side. From there you descend into the canyon on a trail. The Verde Canyon Railroad tracks are on the south side of the Verde River travel to the left out to Perkinsville from Clarkdale … a beautiful trip to take in the fall.

On the right above the confluence is Black Mountain which is a flat top mountain about 5700′ in elevation and above it at the end of the green top, is the gap between Black Mountain and Casner Mountain above it and it is about 6700′ in elevation. on the right side of Casner, near the bottom of it (near the right side of the photo) is Robbers Roost, a popular destination to hike out to (not me). Sedona is up to the right and out of the frame.

On the horizon from left to right is Bill Williams Mountain, Sitgreaves Mountain, Kendrick Peak, San Francisco Peaks and Mt. Elden … about 4 million years in the making.

The photo below is just a fun shot taken with my Galaxy 9+ after I hung One’s portrait in the entry hall, she jumped up and sat beneath it as if posing for another shot … and she did. Pretty soon that will be my only camera as my equipment sells out. If you have an interest, I still have the EF 70-200mm f/2.8L IS II USM lens, the EF 2X III extender, the EF 400mm F/5.6 USM prime lens and the Canon 1DX MK III camera body available … hoping to get my new gear soon. 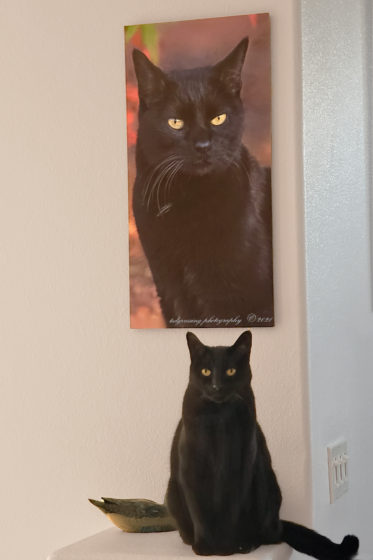 Have an absolutely beautiful day today … share a smile with someone today!

Will future generations understand
The turmoil of these days, the night’s uneasiness,
The greed of itching palms throughout the land?
Will they conceive the fires fanatics fanned,
Of time the universal wastefulness,
The strange philosophies the mobs confess
That every throat cry out some new demand?
Time was when men held saner counsel here.
Will that time come again? Shall we behold
From this grim madness some new love unfold?
We pray for gentler times, when men shall cease
His brother man to bully or to fear.
Great God, among ourselves let us have peace.
— Crisis by Max Ehrmann