… when Ted & Sus were taking me back to the airport on Sunday afternoon a couple of weeks ago Rte 92 out of HMB was stop and stop at Hwy 1 so it seemed like a good decision to head north on coast Hwy 1 and avoid the congestion; we got a late start had the anticipated slow and go going through La Granada and instead of the normally open and fast moving traffic we found stop and once in a while go … it was not looking good for making the flight. Just before we got to Devils Tunnels (officially Tom Lantos Tunnels) the traffic began to open up a bit and Ted began shifting the car into warp speed mode … we got to the terminal 30 minutes before the departure time, a late check of my bag, an extraordinarily helpful crew on security and I made it to the gate just before they began to board the flight and I got my A30 boarding position. 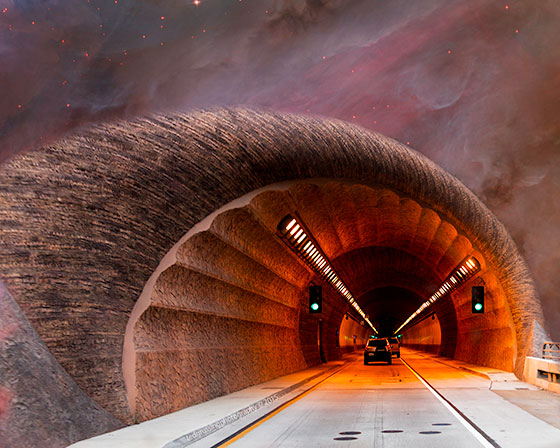 The Bay area being home to Star Trek Command I am always looking for shots and usually find them … this is about where Ted was able to begin to do his magic with the wheel and put it into warp speed, the lights were actually linear acceleration devices and we definitely had the green lights … so this one is for you Ted … great job of driving too. The two tunnels which bypass the area of Hwy 1 known as Devils Slide are the 2nd and 3rd longest road tunnels in California with lengths of over 4,000’ each.

Finished the Win 10 courses today and back to refresher courses on Photoshop … always more to learn and was finally able to get my contacts in Outlook saved as a .cvs file which can be read by my email servers on Network Solutions who host my websites and email servers. Within a month or so I will be able to totally discontinue the use of the local Pop3 accounts and have everything webmail … and that means that regardless of the device I am using, everything will be the same from each device … a deletion from one device will be recognized by all (currently 5 devices). Also Win 10 has a Mail app which will collect all my email accounts including my gmail and yahoo accounts into one app. Love this stuff!!!

We’re into the weekend again … wow!

Have a beautiful few days and may you find that which you seek and may you seek to bring beauty and love to those whom you meet and greet. Life is such an incredible gift, share it while you can.