… I had a wonderful treat a few days ago; as I was opening the shades in the morning, a herd of 12 mule deer were coming through my back yard. Fortunately I have recently had the windows cleaned and got some great shots without having to open a door or window. This young buck and doe were looking back at the others who had yet to cross the cart path to descend into the arroyo. 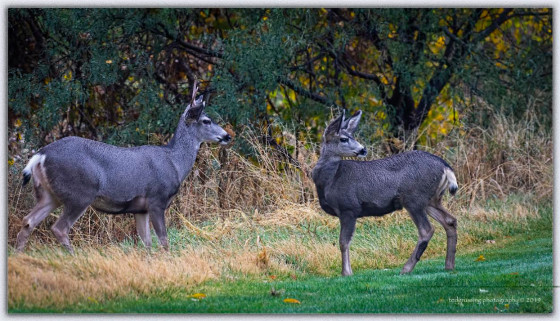 Also on the subject of looking back, the quotes I used last night and which were attributed to Socrates were in fact not quotes of Socrates. A friend cast some doubt on them and further examination revealed the true attribution to two of them and one is left with no other attribution, but may be other than a quote from him. She also pointed out that Socrates did not pen any writings and this is true … however his words and teachings are transmitted primarily through the writings of Plato and Xenophon in the form of dialogs; they were students of Socrates and this was a much more personal relationship than current understandings of teacher/student relationships. Some scholars ascribe varying levels of confidence in remarks attributed to Socrates depending on the work in question.

As in everything else on the web, be careful and authenticate that which is presented … it is loaded with misinformation and outright falsehoods.

So, yes there are no direct quotes of Socrates, and those that are attributed to him come from the writings of his students and contemporaries. Whilst a Greek language major at Macalester I read most of their writings in the original ancient Greek language … currently relegated to reading the sometimes imperfect translations that are available.  I bought the complete works of Plato, Xenophon, Aristotle and others tonight. The English language is constantly changing too and many of these translations  are in need of re-translation. For example    The Apology by Xenophon was translated by Henry G. Daykyns a British scholar who lived between 1838 and 1911. The English language as used in present day United States of America is markedly different, so I believe many of the quotes out there have been “modernized” … that is understandable.

As used in ancient Greek, apology was best defined as an explanation or a reasoned argument, a defense and had nothing to do with what we interpret as saying I’m sorry.

Enough … only a few hours until espresso flows and another day is underway. I do appreciate the call out on the quotes as it has inspired more studies into a subject I love. Feel free to correct me if you think I have gotten something wrong as I take no offense and if it helps me learn, you have given me a benefit.

Apollodorus: … but the hardest thing to accept, Socrates is to see you put to death unjustly. (a friend, student and follower of Socrates)
Socrates:       Would you have been happier, my friend, to see me put to death for some just reason rather than unjustly?
— The Apology by Xenophon

Sometimes you put walls up not to keep people out, but to see who cares enough to break them down.
Attributions only to Socrates in the searches I have done and QI has no information on it.

Be kind, for everyone you meet is fighting a hard battle.
Attributions to Socrates, Plato, but QI is solid for Reverend John Watkins aka Ian MacLaren https://quoteinvestigator.com/2010/06/29/be-kind/