… it is that time of year when intense beauty is released everywhere … the Iris’ are making their debut. Some flowers such as orchids have blooms that will last weeks to months, but there is nothing to compare with the iris which releases unimaginable beauty  over a few short days and then retreats for another year. Thanks to my friend and neighbor Liz for allowing me to shoot her Iris again this year, she feeds her Iris … I need to start feeding mine too and perhaps I’ll get some blooms also. 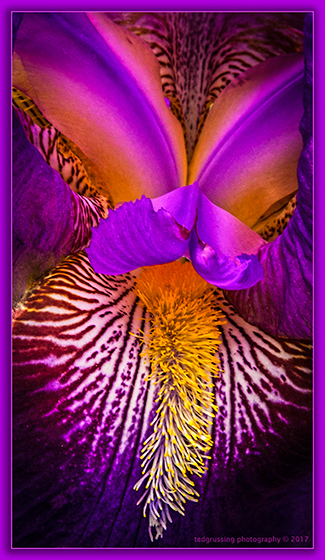 Today was an optimal day to shoot Iris and other blooms as the sky was pretty overcast and thus kind of a muted lighting with no extreme highlights or shadows. A lot of photographers use tripods and other aids to shoot flowers and that is probably a good idea, but I handhold everything as it gives me more flexibility in angles and perspectives. I prefer manual mode so I can get exactly what I want and was flipping between that and aperture preferred modes today. I used the Canon 5D MK IV with the new 24-70 lens today and am going to switch over to the 100 macro tomorrow.

A fun day cutting stones, shooting Iris, working on the plane and a great outing with One and likely more of the same tomorrow.

Spend some time gazing into the beauty of iris in your neighborhood while they are in bloom … fascinating worlds in there.

Smile and share your joy … it comes back to you.