… how many galaxies, stars, planets and other celestial objects have bee seen at Lowell Observatory since it first became operational in 1894? How many people have availed themselves of the opportunity to look out into the vastness of the universe from the portals that exist on Mars Hill, in Flagstaff, AZ? 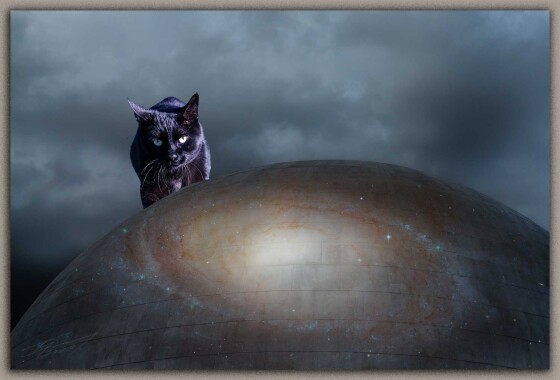 I took this shot on August 22, 2013 when Corky and I went up there to visit the site … heavy monsoonal activity was in progress and lightning strikes were occurring all around us … One who had only been with us for a few months exercised her feline powers and joined us for the adventure … she is coming up over the edge of the dome on the main administrative building, while galaxies flash through the dome in random order. All is well with the universe and with us.

You can learn more about Lowell at: https://lowell.edu/ ; in addition to the Mars Hill facility, Lowell also operates the Anderson Mesa Facilities and the newest gem, the Discovery Channel telescope near Happy Jack Canyon.

Into a new week and the first day is here … wide open, no restrictions and ready to be lived. Have a beautiful day and choose to smile.

Sleep quietly, now that
the gates of the day are
closed. Leave tomorrow’s
problems for tomorrow.
The earth is peaceful.
Only the stars are a broad;
and they will not
cause you any trouble.
— Max Ehrmann