… or so it seemed that this playful creature was saying as I disturbed his food gathering and he scurried up a tree and gave me a look that said “keep moving dude”. So a few more shots and I moved on down the cart path to home and another steak  and broccoli dinner. Tough to choose anything else when you get 12 oz. USDA Choice NY Strip steaks, bone out for $4.00 on sale. Wendy’s is expensive by comparison and not nearly as good.  I’m finding that cooking for one can be a pretty simple thing and not entirely unhealthy. Current dessert favorite is half a chocolate bar. 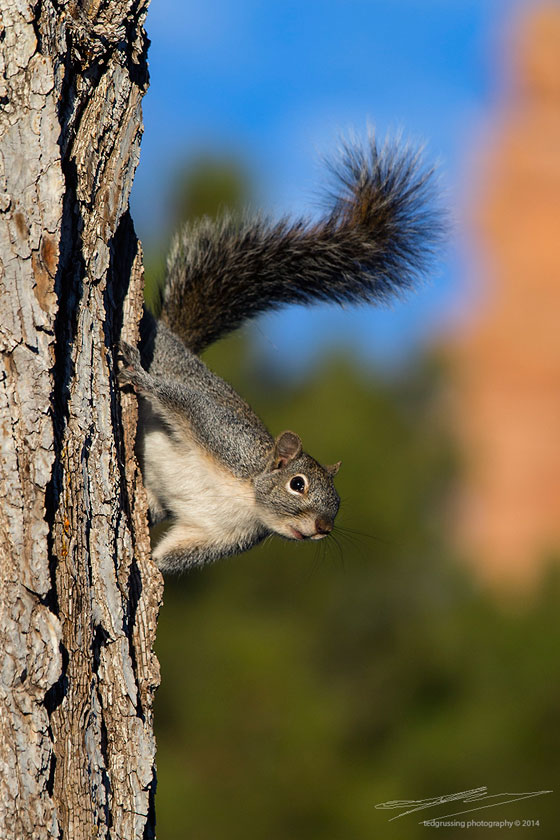 A good day, some more writing and went through more drawers which means that the girls will be getting another box or two in the next few days, Twice Nice gets another box of nice stuff, and I get more drawer space … like I need it? Also found some letters that Corky wrote to my folks while we were on our honeymoon at the lake place and also from our home in Denver before I got out of the service. It was fun reading them again. My mother was a saver as was Cork.  So not much else today … I did take about forty five minutes to untangle a gold chain that was all gnarled up around an earring … don’t think she wore I very much. More writing and scanning of slides on tap for tomorrow and getting more packages shipped. One believes she is not receiving nearly enough attention, but she is patient … she may be plotting a nefarious attack  if I don’t shape up soon :+)

Our friend Reagan Word is one of three finalists  in the Sedona Schnebly Hill Roundabout Competition. Voting has begun and his entry “Open Gate” can be seen on his website http://colorcove.com/gateway.html and also with the other two entries at: and you can vote for one of them at: . This is one of the busiest roundabouts in the city and it sure would be nice to be looking at a Blue Heron as opposed to the other choices; besides he used one of my photos as his model. You do not have to be a resident to vote on the art to be selected so I hope you will take a look at them and cast your vote for Regan’s “Open Gate” Thanks! I just voted.

Have a terrific day and share a smile or three … it will brighten someone’s day and yours too.