… it was a beautiful fall morning and the balloons were in the air over West Sedona and a gorgeous morning to be in the air. There were actually five balloons in the air, but a crop got rid of two of them. On the right portion of the image is Thunder Mountain and on the left an unnamed one, above it is Chimney Rock and above and to the left  of it is the Cockscomb. The flat top mountain behind these is Black Mountain and between the right side of it and Thunder Mountain you can see red rocks on the far side of Sycamore Canyon and you’re looking through the gap between Black Mountain and Casner Mountain which is on the very right side of the image on the horizon. 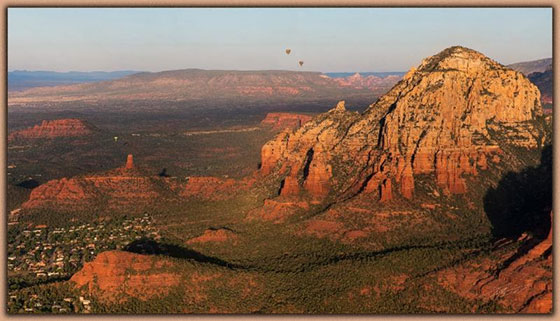 The red rocks on the far side of Sycamore Canyon are about 22 miles from where this photo was taken. Behind Black Mountain on roughly a straight line and about 35 miles out is Perkinsville, where the Verde Canyon Railroad takes you …. About a two hour ride through the Verde River Canyon from Clarksdale; it is a fun way to spend a day. On the far horizon on the left are a portion of the Bradshaw Mountains and the source for the Verde River. Corky and I flew up there one fine Sunday morning just for the fun of it and it looks very nice up there.

Lots of progress on the photo deletions today and started what will be about a weeklong upload of the portfolio to cloud storage. Espresso with friends, got clearance from docs who believe that I am currently breathing and relatively certain that I will tomorrow too. Can’t ask for more than that and feeling very good.
Time to wrap the day … have a beautiful day.
Cheers
Ted
Though changed as are my songs from youth,
A voice within my heart still sings,
Live thou in tenderness and truth,
And love mankind instead of things.
— Max Ehrmann