Today’s Photo from Ted Grussing Photography:
Going with the flow …

… earth is a beautiful place to be and the constant change in all things earth is a wonderful thing to behold … our species tends to take itself a little too seriously and sometimes it is good to kick back knowing that the planet has been around for billions of years before we got here and it will be here for billions of years after we are gone … it does its own thing and cares not a whit whether we are here or not. Had we been here five million years ago and as advanced (whatever that is) as we are now, I think it would be unlikely we would have a Grand Canyon to protect today … it would have been our duty to prevent the erosion caused by the Colorado River … divert it, dam it, cut irrigation channels to get the water off the Plateau … never ever allow it to erode away a portion of the earth a mile deep and more miles across … dire consequences could follow. 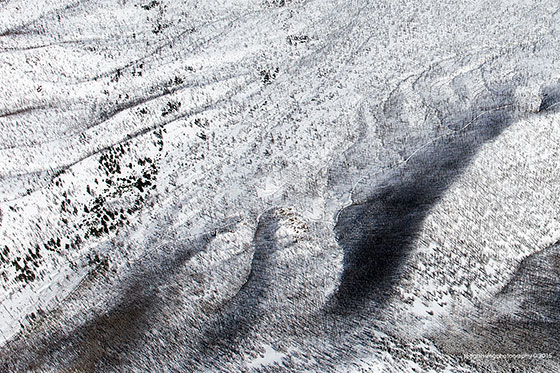 I took this shot on the east slopes of the San Francisco Peaks yesterday … I like the lines … the erosion and the trees and light and shadows.  I wonder what it will look like in a thousand years … I wonder …

It was a fun day and cannot think of a single productive thing I did today … didn’t turn a computer on until midnight … no work on photos or gemstones or the house. I did feed One several times today, cleaned the litter box and took out the garbage … made several SF Vanilla lattes … exercise, treadmill and walk … had lunch with a couple of friends at the airport both of whom are glider guiders and flew in for lunch (power) … home, fed the birds, a nap and back to the airport to greet some other friends that flew in for the night and a dinner at the Mesa Grill (2 meals in one day Mark) and then home. So it was an absolutely terrific day … no work and a large part of the day with friends who are also pilots … smiles!

Back up there in the morning as Rich, Gary and Brent are leaving for California delivering the first in a series of new aircraft that the CHP is buying as they phase out other aircraft. This one is remarkable in its ability to surveil … the electronics and cameras are amazing. So if you are up, take a look as they takeoff around 8:45A and we do a brief photo op before they depart the area.

Into the weekend and back Monday morning … share a smile or three … life is always changing too and it is very good.