… and forever after that … this is a scene that I shot whilst flying near the NE corner of the San Francisco Peaks as the sun was preparing to dip below the horizon and the shadows are long. A number of the volcanoes in the San Francisco Volcanic Field are scattered in the mid ground and in the upper left quadrant is the East Kaibab Monocline, one of the prominent features of the Colorado Plateau. The aspen were in near full color below me on the side of Humphreys Peak and the Grand Canyon lies in the shadows . 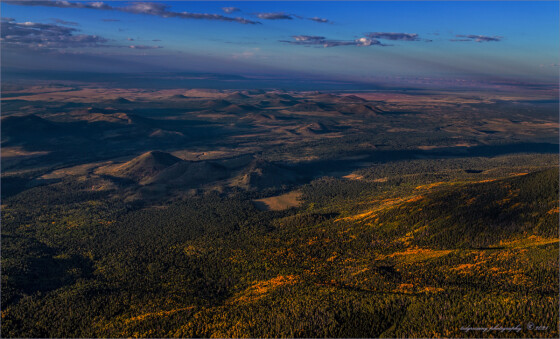 It is a sight that remains in the mind as you sit on the edge of forever it is always changing, just like everything on our little planet … and we are blessed to be here and be amazed as we peer into the face of past, present and the future of forever.

I’ll be back Monday morning … have a beautiful day and weekend, smile and enjoy friends and family. Our time is short, so do not waste it.

Though despised and rejected by men in the light of the day, the night will not reject you; and in the still of her soft shadows you are free. After the day’s struggle, there is no freedom like unfettered thoughts, no sound like the music of silence. And though behind you lies a road of dust and heat, and before you the fear of untried paths, in this brief hour you are master of all highways, and the universe nestles in your soul. Therefore, in the night, sit still a while and dream awake, ere you lie down to sleep.
— Max Ehrmann