… pathways into the unknown … pathways to forever … all alone on a tiny planet that seems so vast to us. There are scenes which so emphasize the beauty and vastness of space time that you just keep coming back to them … I could spend forever in the moment when and where I took this shot and be drawn to explore whatever lies beyond … or perhaps just remain here and be in awe and wonder. Looking out over the Colorado Plateau with A-1 crater in left center foreground, Kendrick Peak on left and the San Francisco Peaks on the right … dozens of other volcanic cones can also be seen … this is part of the San Francisco Volcanic Field with more than 600 volcanoes. 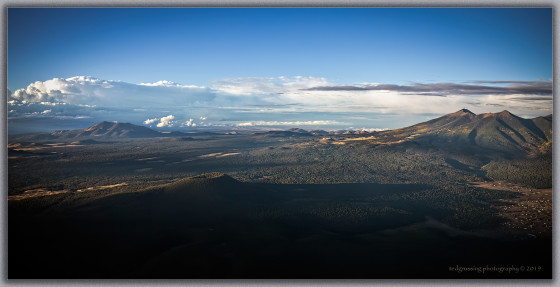 For more than four billion years earth has been evolving, and sometime within the first one hundred million years after the solar system coalesced, earth was struck by a massive astronomical body about the size of Mars in what is now considered by scientists as a very violent collision which may have vaporized both the earth and the impactor body … read more at: https://www.theverge.com/2016/9/12/12879766/moon-planetary-collision-theory-earth-impact . We live on an amazing planet and though of very diminutive size, we are even more so … a huge planetary body to us and largely unknown. Continually changing as earth continues its course around the sun and our solar system around the Milky Way, the galaxy our star system calls home along with hundreds of billions of other star systems.

Have a beautiful day … stretch your mind and be open to all that is. Smile too … we are here.