… about a year and a half ago, a gang of crows moved into the area and took it over … my favorite raptor predators were chased from the area and for the most part the raucous sounds of the crows dominates the scene. Lately I have seen some Sharp Shinned hawks moving back into the area, but it is not without a fight. Yesterday afternoon I got this shot of a Sharp Shinned hawk (Coopers?) perched in a branch on the tee box across the cart path from our backyard fending off attacks from some thugs from the gang of Crows. There were four Crows engaged in the attack and it went on for about five minutes and the hawk did not yield … finally the crows moved on and eventually the hawk spotted prey and went on his own attack … such is life … better predator than prey … better to have the means to resist aggression than not. 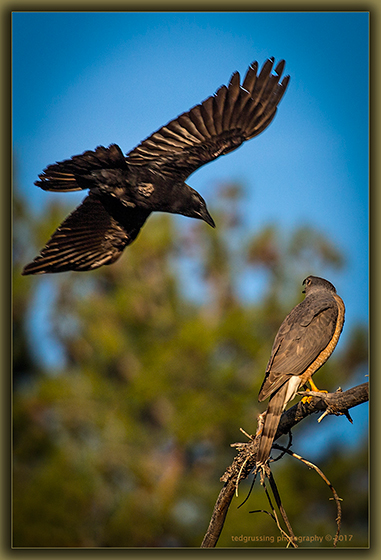 I got quite a few shots of this series of attacks that turned out nice. I was using a Canon 1DX with the new 100/400 lens and shooting 1/2000th of a second, ISO 400, f5.6 shooting 12 frames per second in raw format. The branch was about 40’ from me so my depth of field was only a foot and the crow was right on the fringe of the DOF. When shooting sequences like this I keep both eyes open; one keeping the hawk in focus through the viewfinder and the other keeping an eye on attacks being initiated. As soon as I pick up an incoming attack not yet in the viewfinder I begin rapid and continuous shooting. Based on the distance between crow positions in the sequences I calculated that the crows were traveling an average of sixty feet per second or 40+mph in the attacks. If you wait until the crow enters the field of view of the camera you will never get the shot. Anyhow, a tip you may find useful someday.

A nice weekend, flying, work on stones and some relaxing times. Into a new week and methinks it has all the ingredients to make it a good one … still breathing!

The moon is passing in and out of the clouds,
making a shadow-checkered day of the night,
and breaking the sky with shafts of gold.
All silent, the universe is doing its work- beautiful
mysterious, religious!
— Max Ehrmann