… few ducks are further away from making the endangered species list than mallards and I never get tired of shooting them. Every once in a while I get a new shot that is much better than similar images from previous days and years and this is one of them … hope you like it … a nice built in grin too! Birds in flight are fun to shoot and when you do shoot them, try to have a reference in the image such as the hill in this shot. It grounds the image and gives it a context. Sky only shots are not that interesting. 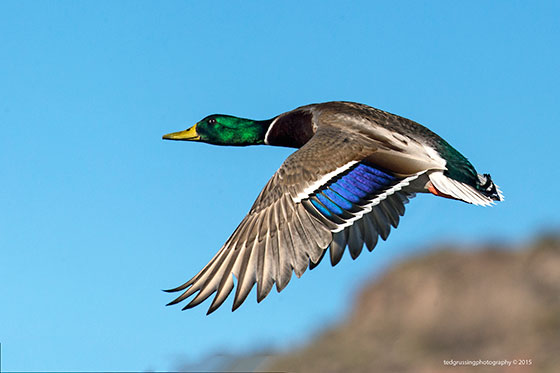 Much accomplished over the weekend and for the first time in years I don’t feel totally buried in stuff to do. Kind of a nice relaxation is setting in as I move into familiar waters with gem cutting becoming an almost daily affair and working with my hands on other things too. The cerebral is good, but nothing compares with seeing the results from working with your hands. A new project reworking a few of the display cases with LED lighting, and also going to begin/resume faceting some large stones that I have laid aside for about ten years.

Trying to figure out what to do with the observatory; for the first ten years or so of living here it was just that, then when the time required for Corky’s care really ramped up I sold the telescope and converted it to my gem cutting room, but moved that back down to my “man cave” about five years ago … maybe I can dream up another hobby to move into it? Life is a fun adventure … the simple pleasures of going for walks and spending time visiting with friends you meet while out on them … following One as she explores her new world in the out of doors. Live today … it is the only day you are guaranteed to have.

A very good week underway … Tuesday at 7PM I will be doing a presentation on photography including a slide show with music to the Sedona Car Club … Si Birch Room, in the main library. Not sure what their guest policy is, but it might be a good opportunity to come and get acquainted with the club.