… that applies to the eggs I had for dinner tonight and also to the flight of this Great Blue Heron as he overflew a mallard down at the ponds. One more day and I can fly too … please drive very carefully Heath … precious cargo and the cure to two months ground sickness. The wings and tail feathers await the fuselage :+) 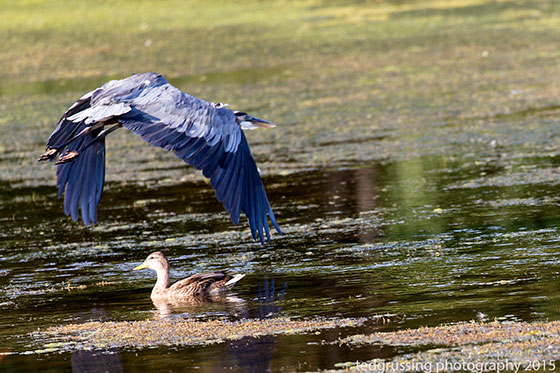 My workstation is still not finished as the CPU cooler was not a good fit even though it was advertised as being compatible with the 2011 v3 socket. I’m going to pick one up at Fry’s when I’m down in Phoenix this afternoon and with any kind of luck I’ll have it working by Friday. I already know what my next upgrades are going to be and that will occur next year. Intel has rolled out SSD drives that fit in the PCI e x16 slots of the MB and boast speeds of four or more times the fastest speeds of current SSD’s that connect through SATA 3.0 connections. Also the core i7 5930K CPU has 40 channels compared to the 28 on the core i7 5820k that I have – it allows 2 PCI e x16 slots on the MB whereas I can only have one with the 5820k. Also the price on the new SSD’s will likely come down quite a bit next year.

In 1978 Cork and I bought a 10MB external HD for the Law Office … it cost $5,000 then and was $500 per MB. I have 256GB of memory storage in this laptop which at that price would be $128,000,000 today; instead we pay about 50 cents for a GB. Tech has come so far and is still on a major growth rate. Gotta love it!  There are few things I find more fun than working with this stuff … flying … photography and the list goes on, but puters are special and a fantastic work tool. Sorry for all the tech stuff, but I have a blast with it and so do quite a few on this list.

A long day coming up so will put a wrap on Sunday. Pretty exciting stuff with another week coming up and maybe we’ll get it right this week for the first time or maybe for the umpteenth time. Smile and share your joy.