Today’s Photo from Ted Grussing Photography:
Creatures of the air

… leaving in the morning for San Francisco and a few days with Ted, Sus and Annika … and a lot of shooting the sea in all its moods and flowers at Filoli Gardens. How much better can life get. I do miss the ocean and think you will love the photos I bring back with me. Derek told me that Saturday is being predicted to be a Mavericks Day in Half Moon Bay; this is the really big wave surfing that only the best surfers in the world can handle with waves reaching up to sixty-feet. Check it out at: http://titansofmavericks.com/ . This is also going to mean very high surf along the coast which means incredible shooting, provided everything else falls into place too. Minor things like lighting, winds sunny skies or at least enough rays to light up the water and hopefully no rain. Should be flat out awesome. 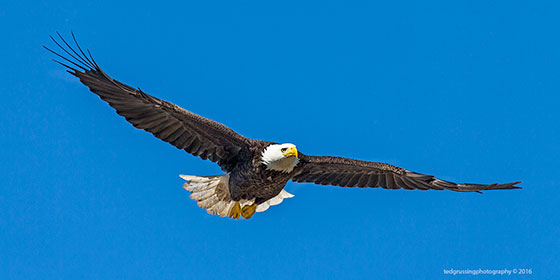 This afternoon I took a short break to go down to the ponds and was greeted by a Bald Eagle. He spent enough time with me so that I was able to get 500+ shots of him mostly in flight. I also got some shots that are among the best I have taken of eagles and here is one of them.

Time to pack and get the camera gear ready to go; knowing the surf conditions I will be bringing more camera gear than planned …

Have a beautiful day tomorrow … enjoy the company of everyone you meet and greet … who knows what can happen because of a simple smile?

Probably no email Friday morning, but I will try … If not, I’ll be back Monday morning.