I think I’ll devote this week to shots I took over the weekend whilst visiting Ted, Sus and Annika (nearly 2,000 of them). Derek gave me a number of hints on shooting the waves which helped enormously, but we’ll start with a land/seascape shot of Pigeon Point Lighthouse that I took as we headed down the coast to Carmel, Sunday morning. I’ll finish the week with the same view, but taken at sunset Sunday afternoon with the setting sun behind the lighthouse. Then there will be three shots of water in between these two shots. 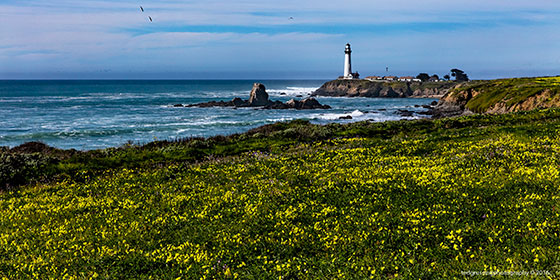 Looking very much like I’ll combine my April trip to Malibu and Los Angeles into a longer trip and bring One along with me. So much beautiful coast to travel and capture the beauty of the sea … and then to share. Sus has been sharing listings of homes in Monterey and Carmel with me and have to admit I am liking them, but we’ll see … I love it here in Sedona too. Can you imagine basing Mariah at the airport in either Monterey or Carmel and getting low altitude shots of the coastline? I can, but we shall see :+)

A wonderful week underway, so have a beautiful day and share your joy … smiles do a great job of that.