Today’s Photo from Ted Grussing Photography:
Betwixt and between

… I took this shot this morning as I was heading out to get some close up shots of Robbers Roost the rock that is in sunshine on the right hand side of the image; there is a cave on the upper right portion of the rock I wanted to get some closeups of and the lighting looked very good out there. I continued my flight along the edge of the rim as I lost altitude and came by RR about a hundred feet above it and a few hundred feet this side of it. I continued at the low altitude and about center of the image I turned right and flew well below the two mountains (Casner on the right and Black Mountain on the left) into Sycamore Canyon; there was some beautiful lighting behind Casner, so once in the canyon I turned right and flew a few miles up the canyon before turning back down the canyon and ultimately shooting the rocks on the left side of the image above center. Above Black Mountain on the left side of the photo is Perkinsville and further out Paulden and the Chino Wash. Following the rim up and to the right will bring you to Ash Fork. 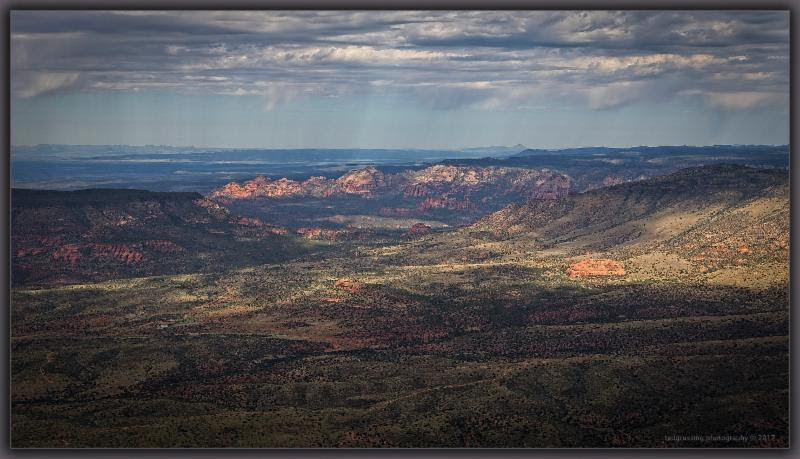 Got some nice shots on Watson Lake on Friday and also tried Willow Lake … Willow is a shallower lake than Watson and the weeds were in full bloom which instantly clogged the electric motor propeller and we used the paddles to get back to the dock and then headed over to Watson … think it will be better in the winter … two guys who were fishing off the dock said that it wasn’t this way earlier in the summer … and then he caught about a two pound largemouth bass which he released … Yay!

A friend sent me a link to a video which I have found to be absolutely captivating and it is the final chapter in the story of a young man by the name of Loyce E. Deen who was killed by anti-aircraft fire in a raid on a Japanese Cruiser class ship near Manilla on November 5, 1944. Both Deen and the Grumman Avenger were heavily shot up by the 40mm anti-aircraft shells. The decision was made to bury him at sea in the aircraft he died in. The video shows the aircraft, a Grumman Avenger TBM VT-15 #93 piloted by Lt. Robert Cosgrove, coming in for a landing, the final preparation for the at sea burial, a serviceman taking the fingerprint of Deen, the brief service and the committal to the sea of Deen and the aircraft. The video is only a minute thirty eight seconds in length and I hope you take the time to view the video and read the story … there were others who are well known that served our country in the military back then … Paul Newman was a Radioman and Gunner in an Avenger too. A lot of our most famous actors served in the military and saw action and they loved this country! A far cry from many in the entertainment industry these days. I had four uncles serve in WWII, three came back. Approximately another 419,000 Americans were killed and overall more than 60,000,000 lives, military and civilian, were lost in the war.
I think what is so compelling about this video and story is that it is about a real 24 year old young man serving his country, giving his life for us so that we could continue to live in freedom, and to see his plane come in with his body in it, and then being committed to the sea which is where his remains still reside after nearly 73 years. Read his story on the website too … and perhaps like me you will wonder what is happening with the current generations who are unable to tolerate speech and viewpoints that do not agree with theirs; colleges that provide safe spaces for students so that they are protected from whatever imagined viewpoints might offend them … where students and protestors shut down those whom they do not agree with or like. The lack of a sense of history and civility today is astonishing. Life is messy and wonderful at the same time … life is not an app and does not reside in a smart phone, it is out in the real world where people learn to get along, respect each other and make things work.
So this is the video: http://loyceedeen.webstarts.com/uploads/GoingHome.mp4 and this is the website: http://www.loyceedeen.org/
Another new day and week underway … share a smile with those you meet and greet … we’re all in it together.
Cheers
Ted

THE LIGHT OF A CHEERFUL HEART

I tell you that you and I and the commonest person are all journeying the same way,
hemmed in by the same narrow path, leading to the eternal years.

We pride ourselves over our particular superiority; but really there is little difference
between us.

And in this journey over the thousand hills and valleys called life; he is wisest who
Is patient where the way is hard, has faith when he does not understand, and carries
Into the dark places the light of a cheerful heart.