… some sights lend themselves to evoking a sense of peace and rest and this is one of those. I took the shot in December of, 2014 ENE of Flagstaff and looking to the ENE across a large portion of the San Francisco Volcanic Field. The field includes about 600 volcanoes ranging from six million years old to less than a thousand years old; the most recent cone formed is Sunset Crater and it is a beautiful place with wondrous lava flows, gnarled trees, cinder fields and a sense of history. On this day, this area of the planet was at rest and blanketed by an endless sea of puffy clouds only a few hundred feet above the surface of the planet. 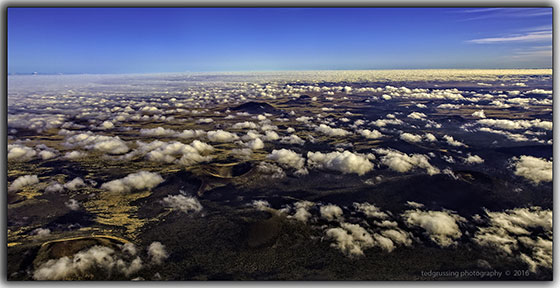 I think I’ll send out a shot of Sunset Crater tomorrow night; it is one of those photogenic features and it appears to be heart shaped from the air … with the reddish cinders around the top it has a very unique and beautiful appearance.

A quiet day, some time with friends and work on photos. Best news of the day is that the exhaust manifolds have arrived and it is almost a certainty that I will be back in the air before the end of the month … then a project of shooting all the beautiful areas of Northern Arizona will be underway using the Canon 5DsR 50MP camera. This is a project that I have been looking forward to finishing; many new shots to take and also and replace many of my older images which were shot with lower resolution DSLR’s.

Have a wonderful day … keep breathing and smiling