… for about the past 4.5 billion years our little planet has been undergoing constant change … we have had several atmospheres and only the latest one is hospitable to human and other carbon based life forms … and the oxygen content of the atmosphere has varied from a low of about 10% to a high of about 35% over the past 500 million years. At 10% combustion is not possible … no fire … at 35% spontaneous combustion in rain forests … I kinda like the present 21% which works well for we humans. A recent study by scientists at MIT shows that minor volcanic activity is having a cooling effect on the planet … because of our relatively short life span things seem pretty stable and unchanging when in geologic time events are occurring quickly.  I would imagine to an insect that only lives for hours there is never any perceptual change and to us the planet seems pretty stable … but it is not. 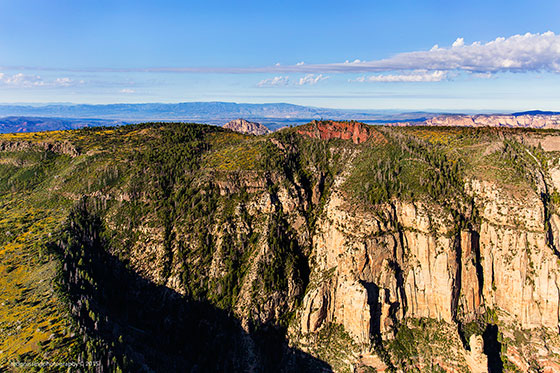 I took this shot of Wilson Mountain back in September and it is one of my favorites in the area. Wilson was formed by uplift and volcanic activity and you can see a portion of the cinder cone in this photo. The cone was sheared by an earthquake and the rest of the cone was dropped several hundred feet ( I think Wayne mentioned 800’) and moved it about a quarter mile to the SE. Can you imagine what that or those earthquakes were like to move the earth so much? Wow!

For reference I was about 7300’ and over Oak Creek Canyon heading N when I took this shot. Wilson is about 7100’ and flat on top … kind of a neat perspective. In the saddle to the left of the volcanic cone you can see the top of Thunder Mountain and beyond that the Verde Valley and Mingus Mountain in the background. On the left side of the photo just above Wilson you can see out to the Village and above that Camp Verde. It was a beautiful day and hoping to be airborne before Friday.

Today was kind of a funky day where I got a lot done, but nothing I had planned … maybe tomorrow. The Wednesday night group at the Hilton seems to be reassembling and five of us ended up there tonight. Next week Anthony will be back there playing and if you would like to show up you are welcome. It has evolved into a very eclectic group and few show up every week … 6P on Wednesdays in the Shadow Rock Grille. Looking for some fun conversation and company? Show up some time … reservation is always in my name … no need to let me know, just show up or not.

Have a fantastic day today … we are breathing and have the ability to choose to have a very good day and share our joy with those whom we meet today … at the least have fun :+)