… I got this Greenhead a few days ago and it doesn’t look like he remembered to lower his landing gear (webbed feet to ski on and decelerate before going down into the water. Love those sheets of water coming up though and the rooster tail coming up behind him. Seems to have a look of self-satisfaction too … wouldn’t it be cool to come in like that? I think most of us have done a pool emptying entry at one time or another … but this is elegant. 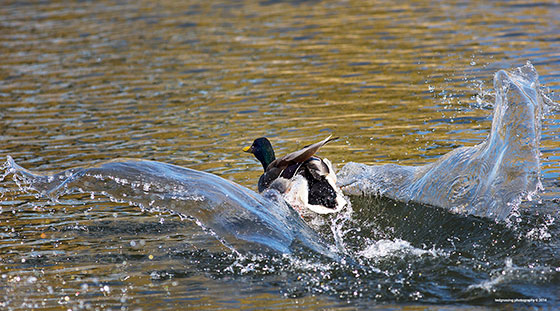 Got the new Canon 7D MK II late afternoon and finally got out around 4:30 for a walk with it. I think I got some pretty good shots but cannot find out if I did because Adobe has not updated the Camera Raw interface to process raw images from the 7D MK II yet. Switched to shoot both raw and jpegs now so will at least have something to look at while I wait for Adobe to do their thing and update the program. The DP review on the camera body is quite good and if interested you can read it at: http://www.dpreview.com/previews/canon-eos-7d-mark-ii On the forums there is the usual like it dislike it comments which I do my best to ignore. Beyond a certain level of hardware quality it is the person using the camera that really matters.

Had pretty much a hermit type day and really enjoyed it. Put the finish polish on about forty opals and they look great; then weighing and measuring and putting them in papers and tomorrow they get shipped. Packed one of the 1D X bodies and the 6D body to go back for cleaning and calibration and will have them back by mid-week next week. Also a bunch of other projects got attention today and a couple of walks for good measure. Oinked out on The Girl With The Dragon Tattoo trilogy tonight , a mere seven hours of viewing pleasure accompanied by a pizza and diet Pepsi … Ghirardelli milk chocolate for dessert and more diet Pepsi … and a wee bit more chocolate :+)

We’re into the weekend and hope that you have a terrific one … more hermit time for me as I get long postponed projects completed … hopefully a little time with friends too. Share your joy … start a string of smiles … be the first one to put one on another’s face today and each day … and make a big splash!

Back on Monday … Cheers