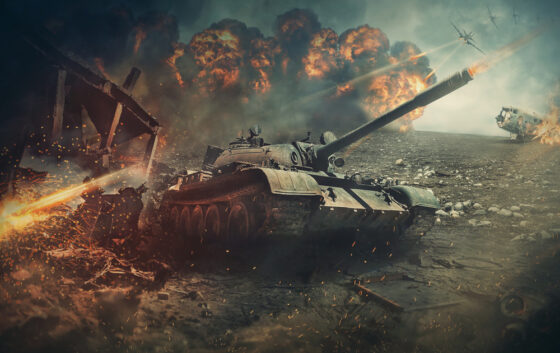 Sedona, AZ – This one is for those of you currently losing sleep over the menacing clouds of war looming over Ukraine and Europe and the distinct possibility our country could be pulled into it.

Don’t worry. Be happy. Go back to stressing about Covid and the mandates. That war just ain’t gonna’ happen. No chance. No way. Not in the cards.

It’s like two roosters posturing, fluffing their feathers to scare the other away. It’s all bluff and bravado, but on an international stage rather than a barnyard.

Nobody really wants that war. Except, perhaps, those in the business of making and selling its lethal machinery.

Other than them, people are just too civilized now, too connected globally to want a bloody war of the proportions one in Ukraine would achieve.

A war of such magnitude would throw the global economy into a tailspin. Kill hundreds of thousands. Set Europe ablaze. Come home to our shores. Who knows how far it could escalate.

The bloodbath and carnage that would ensue with today’s uber-lethal weapons would be incomprehensible, unfathomable.

Further, if Russia was really serious about taking Ukraine, they would have amassed more than 150,000 paltry troops to defeat a Ukrainian military that’s almost 250,000 strong and extremely heavily armed by us and other NATO members.

To achieve a decisive victory they would have had to commit at least 300,000 troops out of their 1 million strong military and 2 million strong reserve.

The chess game being played is one of finesse, nouns and verbs between the conflicting sides, basically revolving around one issue: the West wants Ukraine with its Black Sea access to join NATO and the Russians will not allow it. Period!

The Russians have drawn a line in the snow and if they must go to war they will, but first they would have to commit a third of their armed forces to the task and that will take a bit more time.

When we see that, then it’s time to worry. But for now, the players are at the table hammering out a deal.

Only a monkey wrench thrown into the proceedings by the global military industrial complex could ignite a real war. But the purveyors may be satiated for now with all the hardware they are presently selling because of the current perceived threat level.

The fact that Ukraine joined The Partnership for Peace (PfP) is enough of a thorn in Russia’s side to make Putin wince.

To have Ukraine join the surrounding NATO countries under U.S. control is unacceptable and Russia is letting everyone know with its military build-up, that it’s a serious no-no.

Russia is not going to let down its guard until it’s sure the threat of Ukraine joining NATO is mitigated.

Call it a European “Mexican Standoff” if you wish. Everyone is pointing guns, but no one wants to pull the trigger.

Diplomacy, in the end, will terminate the crisis, just in time for another one manufactured, to scare the be jeepers out of us.

How about a global stock market crash the likes of the one in 1929? That would certainly get our attention now that Covid is losing its glimmer.

How about an alien invasion? Oh yea!