Sedona AZ (February 24, 2017) – On February 23, 2017, a 86-year-old Cottonwood woman called the Sheriff’s Office in a ‘panic’ having heard about the media release regarding the arrest of suspect Rodriguez and her theft of electronics using an elderly victim’s funds. Based on the media information, the woman was aware that only a portion of the stolen property had been recovered. She explained that Rodriguez stopped at her home in Cottonwood on Wednesday (February 22, 2017) and asked to store electronics items due to a lack of space. Rodriguez knew the woman from years ago when she assisted the woman’s now deceased husband with computer work. The woman had not seen Rodriguez for more than 6 months until this contact and she permitted Rodriguez to store the items in her garage.

As a result of what she heard in news stories, she now suspected the property in her garage was a portion of the merchandise purchased by Rodriguez using the elderly victim’s unauthorized funds. She did not want evidence of the crime kept at her home and asked for help. Detectives immediately went to the Cottonwood residence and located more than $25,000 worth of electronics stashed by Rodriguez. Detectives inventoried the property and confirmed every item belonged to a list of missing merchandise created after the earlier recovery of property seized during the original investigation.  All the items found were brand new and still in the original boxes and included cameras, 2 drones, several IPhones, IPads, Apple computers and watches, speakers, printers and flat screen televisions. Some of the merchandise was purchased 2 years prior.

It was clear to detectives that Rodriguez hid the stolen property at the Cottonwood home to avoid having the items seized and to conceal evidence from her pending criminal case. She was currently out on a $20,000 bond from the same case. Early yesterday afternoon, Rodriguez was located leaving a local courthouse and arrested. She was charged with Hindering Prosecution, booked at the Camp Verde Detention Center, and remains in-custody on a $25,000 bond.

Sedona AZ (February 23, 2017) – Last month, a family member of an 89-year-old Sedona woman who is legally blind, contacted the Sheriff’s Office to report concerns of caregiver theft. The caller indicated it appeared more than $100,000 had been stolen from the victim. After a deputy interviewed the victim and documented the allegations, the case was assigned to a YCSO detective. The caregiver, 42-year-old Christina Rodriguez from the Village of Oak Creek, was confirmed as the suspect. The detective confirmed Rodriguez used several of the victim’s credit cards for personal gain. 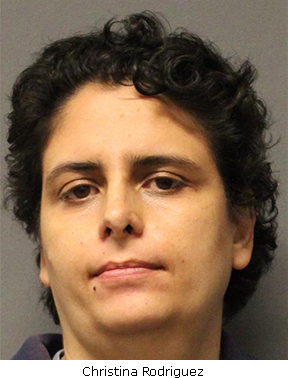 A review of bank records, receipts and details from the victim and other witnesses revealed nearly $190,000 in fraudulent, unauthorized charges by Rodriguez on the victim’s credit card accounts between January 2014 and December 2016. All the purchases were above and beyond what Rodriquez was paid as a caregiver and not for the benefit of the victim. Because the victim is legally blind, she needed her caregiver to pay bills and review financial documents. When the victim’s family eventually discovered the unauthorized charges, they and Adult Elder Care personnel confronted Rodriguez and she resigned.

Some of the unauthorized charges by Rodriguez documented during the investigation include $35,000 for the purchase of cameras, Iphones, drones, printers, computers, flat screen televisions, etc., from an online retailer. Another $20,000 from a local electronics retailer. Additionally, Rodriguez spent $38,000 of victim’s money to pay on her (Rodriguez’s) personal credit card, $5000 on a stereo system for her personal vehicle, and $8000 for Apple Computers. Rodriguez also wrote several thousand dollars on the victim’s checking account payable to herself as cash. The detective documented purchases by Rodriguez at gas stations, restaurants, building supply stores, retail stores, print and frame shops, furniture stores and retail shops all around the Phoenix area.

In mid-2016, Rodriguez was able to convince the victim to sign over Power of Attorney for all financial and medical matters while continuing to misuse her authority until finally resigning.

When interviewed, Rodriguez minimized the amount of loss and claimed the victim told her to spend the money or suggested it was payment for the extra hours she worked.

On February 16, 2017, detectives served a search warrant at Rodriguez’s Village of Oak Creek home and recovered thousands of dollars in stolen property, including cash and several high end cameras and computers. A search warrant was also served on storage units belonging to Rodriguez where additional stolen property was recovered including numerous empty boxes for electronics and smart phones. Those items are still being sought.

Rodriguez was arrested and booked at the Camp Verde Detention Center on charges including Theft, Fraudulent Schemes, Credit Card Fraud, Unlawful use of Power of Attorney, and Identity Theft. She has since been released on a $20,000 bond.

This story should be a reminder to families who employ caretakers for their elderly loved ones that it is critical to closely monitor the condition of those under care and conduct frequent reviews of all finances. It is always recommended to restrict caretaker access to any accounts and financial records of the person being cared for – remove such documents and other valuables from the home to avoid such concern.

FROM AARP: Here are six tips to guard against theft: