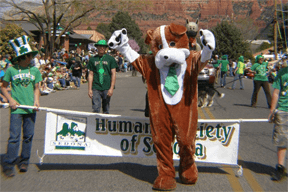 Immediately following the parade, the Parade Festival kicked off right beside the Parade route at Sacajawea Plaza & BR Clinic. Southwest Skye & Pipes bagpipers Michael Donelson and Martha Shideler opened with a traditional bagpipe song and Karl Jones and his band Dublin Soul performed throughout the afternoon. Parade awards for outstanding entries were announced (see list below) and wonderful complementary performances by area youth talent entertained during band breaks. The McTeggart Irish Step Dancers of Arizona were represented by an impressive group of step dancers from Flagstaff and the Verde Valley and they received thunderous applause. Sedona Strings from Sedona Charter School honored us with an amazing performance.

Children were captivated by the wide variety of free activities, while everyone enjoyed lunch offered by the Sedona Community Center and sweet treats from Sedona Fudge Company. Of course there was a Beer Garden, courtesy of Oak Creek Brewing Company. Crowds of residents and visitors alike enjoyed the free entertainment and activities in a great setting on a fabulous day with tables and chairs under canopies all donated by BSE Rents.

The Parade & Festival is a free event for the community and by the community. That is made possible primarily by generous event sponsors named earlier, plus Shamrock Club Sponsors – Farmers Insurance Group-Don E. Nelms, Johnson Insurance Services, LLC and Touchstone Gallery. Join us in thanks to the City of Sedona, Larson Newspapers, BSE Rents, BR Clinic – Sedona Meditation Center and 350 Jordan Road, Waste Management, Oak Creek Brewing Company, Sedona Chamber of Commerce, Arizona Rangers-Verde Valley Company plus the additional 20 businesses and property owners that donated services and/or products to the event along with all the community volunteers who gave time to make it happen. This event is presented and coordinated by Sedona Main Street Program, NAU’s Park and Recreation Management Program and the Green Team event steering committee.