Cinema Under the Stars at Tequa Plaza Tuesday August 16th

The Sedona International Film Festival is proud to present “Cinema Under the Stars” at Tequa featuring the exclusive Arizona premiere of the indie drama “The Last Ride: The Story of Hank Williams” on Tuesday, Aug. 16. There will be one screening of the film outdoors at the Tequa Marketplace courtyard in the Village of Oak Creek.

A live concert performance by the Oak Creek Boys, featuring Chris Seymour and Dave Rice, will kick off the evening at 7 p.m. Come early, bring lawn chairs and blankets … and celebrate country music with the sounds of these renowned local performers! The film will follow the concert at dark.

“This promises to be an extraordinary night of country music and film,” said festival director Patrick Schweiss. “Where else can you experience incredible country music along with a great film under the beautiful Sedona night skies?”

This Arizona premiere of “The Last Ride” comes one month before the film’s theatrical debut in select cities across the country. Executive producer Tim Jackson will be in Sedona to introduce the film and host a Q&A discussion following the screening. Jackson was recently here with his film “Looking for Lurch” at the recent Sedona Film Festival.

Hank Williams called himself Luke the Drifter. He was also known as country music’s original bad boy. He pioneered — and pretty much invented — what we know today as country music. At the peak of his career, he was acknowledged to be the greatest singer-songwriter in American history. But after a meteoric rise to record and radio super-stardom in the late 1940s, the man had made a train wreck of his life. Drugs, alcohol and a hair-trigger temper had ended two marriages, ruined a host of friendships and made the tortured genius a virtual “untouchable” in the music business.

At the end of 1952, Hank Williams gathered what was left of his physical strength to make things right, and began the long road back. He booked New Years shows in West Virginia and Ohio, and hired a local kid who didn’t even own a radio — muchless know who this legend was — to drive him there from Montgomery Alabama. No one else wanted the job.

He never got there. Somewhere on that last highway, the country music legend passed away on New Years Day, 1953, in the back of his powder blue Cadillac, carrying only his guitar and a notebook full of unfinished songs. He was 29.

Inspired by the mysterious final days of Hank Williams’ mercurial life, “The Last Ride” is the story of that final drive through the bleak Appalachian countryside of 1950s America. A lonely two-man odyssey: a boy coming of age, and a man leaving this world way before his time, a victim of his own abuses.

“The Last Ride” takes us inside the heart of a man who knows he’s dying, and a dreamless boy whose fate seems already determined. The all-too-human connection of two souls needing just one friend creates an ending of hope, optimism, and ultimately, redemption on one man’s last ride into eternity.

Tim Jackson, executive producer of “The Last Ride”, will introduce the film and host a Q&A discussion following the screening.

Food and beverages will be available for purchase from the Tequa Marketplace restaurants. Guests are encouraged to bring lawn chairs, blankets and beach towels.

The title sponsor for the event is Tequa Marketplace. The series is also made possible by a grant from the Arizona Commission on the Arts and National Endowment for the Arts, the City of Sedona and the Sedona Community Foundation. 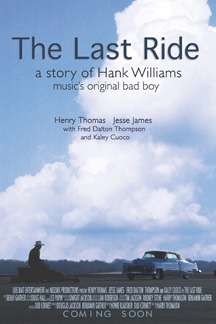 “The Last Ride” will be shown outdoors at Tequa Marketplace in “Cinema Under the Stars” on Tuesday, Aug. 16, with a pre-film concert beginning at 7:00 p.m. Tickets are $12, ($6 for full time students) or $9 for Film Sedona members, and will be available starting at Tequa beginning at 6 p.m. that evening. Cash or checks only. Film Sedona members can purchase tickets in advance at the Sedona International Film Festival office, 2030 W. State Route 89A, Suite 3A in West Sedona, or by calling 282-1177. For more information, visit: www.SedonaFilmFestival.com.

sedona international film festival The "The last ride: the story of Hank Williams"