Cottonwood AZ (February 16, 2017) – The Old Town Center for the Arts is pleased to present the incomparable Celtic Indian Arvel Bird on February 25th at 7:00 PM. Arvel Bird, named by the prestigious Cowboy and Indian Magazine, as one of the top 4 favorite Native American Musicians, along with Buffy St. Marie and R. Carlos Nakai, is a violinist, flutist and composer who brings to life the dramatic connection between Native American and Celtic traditions, stirring up scenes that echo from North American memory.

Arvel has won the coveted title of Artist of the Year at the Native American Music Awards (Nammys), quickly followed by Best Instrumental Album at the Canadian Aboriginal Music Awards (Cammys) and others.

Arvel is a classically trained violinist who has played with such top country stars as Glen Campbell, Loretta Lynn, Ray Price, Louise Mandrell, and many more. His mixed-blood heritage of Southern Paiute Indian and Scottish is the inspiration for his new compositions. He has created such a unique and universally appealing sound with his blend of instruments and styles that it can best be described as World Native Fusion. 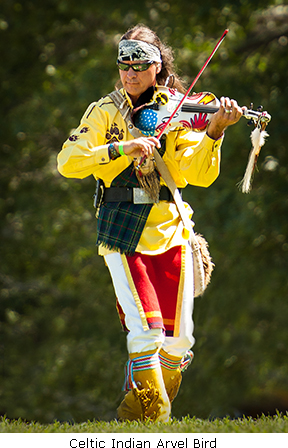 The third installment in Arvel’s Animal Totems series runs from the whimsical and raucous to the orchestral and inspirational, following his first two Animal Totems albums which earned him three awards in the United States and Canada for Best Instrumental album and Artist of the Year.  Arvel will also feature a new song entitled ‘Leave No Trace,’ another composition that expresses his deeply felt connection to the land.

This past summer, Arvel was selected as an artist-in-residence to produce for the 20th Anniversary of the Grand Staircase Escalante National Monument in Southern Utah, five original musical works based on his three week residency in the 1.9 million acres of mostly undisturbed land.  The project included a writer from Brooklyn and a family of photographers from North Carolina.  Arvel will be talking about and performing some of these magnificent new pieces from this experience.  The DVD created from the works of these three artists will be on sale at the National Monument Visitor Center in Kanab, Utah.

Although based in Nashville, TN, Arvel is permanently on the road, connected with audiences the old-fashioned way…live. This is where Arvel’s emotionally driven performance thrives, igniting concert venues, symphony halls, festivals and more, leaving his audiences inspired, transfixed and transformed. In a recent interview Arvel remarked, “If I had to pick one venue to call ‘home’, it would be OTCA.  I love the energy that Christie, Bill and Elena bring to each show and can’t wait to get back.”

Tickets for Arvel Bird are $18 in advance and $20 at the door, $25 Priority seating in the first 3 rows. Tickets are available online at www.showtix4u.com in Cottonwood at: Mt Hope Foods, and Desert Dancer; and in Sedona at: Local Juicery. Old Town Center for the Arts is located at 5th Street & Main in Old Town Cottonwood.  For more information visit www.oldtowncenter.org.

Arvel Bird’s talent was detected early and he attended Arizona State University on music scholarship, and later transferred to Champagne/Urbana, Illinois where he studied classical violin with renowned Hungarian violinist Paul Roland at the University of Illinois.

As he worked to develop his own music style and a large and loyal following, Arvel went wherever the music called him, which led him away from classical and towards Bluegrass, Appalachian, Folk and Celtic.

Arvel returned to Arizona in 1986 and was hired by Glen Campbell to tour worldwide for six years. In 1991, he moved to Nashville and also toured with Loretta Lynn, Tom T. Hall, Ray Price, Louise Mandrell, Clay Walker, and others.

His dream to record and perform using the violin as a lead instrument – completely contrary to the Nashville view of the fiddle as a backup or side-musician instrument –began in 2001. The result was a fusion of both his Scottish (Clan Kennedy) and Native American (Southern Paiute) roots that are uniquely his own and intricately woven throughout his songs.

Arvel has released 25 CDs and two DVDs, which have earned him numerous music awards. In 2009, he took home top honors for Best Instrumental Album and Best Producer/ Engineer at the Canadian Aboriginal Music Awards for Tribal Music Suite: Journey of a Paiute.

Recently, Arvel released “Celtic Indian”, which is a compilation of some of his most requested music at live performances that reflects his dual-heritage.

During his years in the Midwest, Arvel won the Indiana State Fiddle Contest four times while still perfecting a variety of musical styles. His continuously evolving music is delighting audiences worldwide.

Although based in Nashville, TN, Arvel is permanently on the road, connected with audiences the old-fashioned way…live. This is where Arvel’s emotionally driven performance thrives, igniting concert venues, symphony halls, festivals and more, leaving his audiences inspired, transfixed and transformed.