Based on Salem’s infamous witch trials, “The Crucible” takes place in a small tight-knit community, where personal grievances collide with lust and superstition, fueling widespread hysteria.

Miller’s timeless parable attacks the evils of mindless persecution and the terrifying power of false accusations. 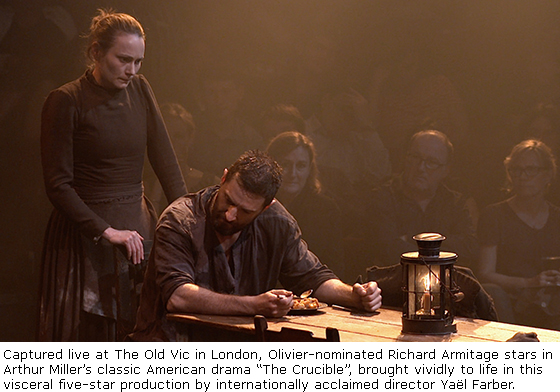 Richard Armitage is making his debut at The Old Vic. He is best known for his work on the big screen, including as Thorin Oakenshield in Peter Jackson’s “The Hobbit” trilogy and Heinz Kruger in “Captain America: The First Avenger”. He can also be seen in the lead role of the action-adventure film, “Into the Storm”.

“The Crucible” will be shown at the Mary D. Fisher Theatre on Monday, March 27 at 3:00 p.m. Tickets are $15, or $12.50 for Film Festival members. Tickets are available in advance at the Sedona International Film Festival office or by calling 928-282-1177 or online at www.SedonaFilmFestival.org. Both the theatre and film festival office are located at 2030 W. Hwy. 89A, in West Sedona.