The Black Market Trust who recently signed a deal with Capital records will be performing a simple, elegant and well-defined classic sound that you will be tapping your toes to. This American pop/vocal combines the sounds of the great American crooners and vocal groups with the romantic Eastern European fire and energy of gypsy jazz guitarist Django Reinhardt. Through their handsome vocals and timeless melodies, the band fuses unforgettable classics with elements of pop. 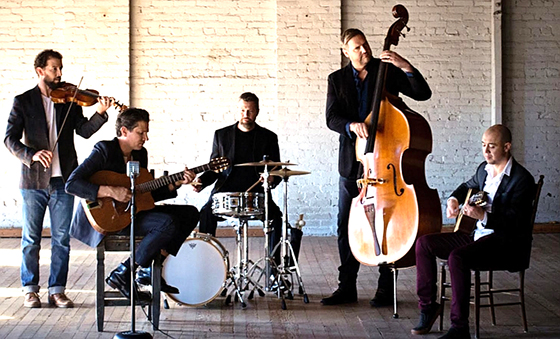 To get a sample of their sound you will find them on Spotify, YouTube, iTunes, CD Baby and PBS. The band has a comedic element as well with some great storytelling.

Consisting of five world class musicians who have traveled the globe recording and performing on the world’s biggest stages and with music’s most renowned artists, The Black Market Trust capitalize on their experience and pedigree to deliver a lively, crowd pleasing performance filled with some of the best songs ever written.

Merging their love of everything from The Mills Brothers to The Beach Boys, Sinatra to Lennon/McCartney, the band has arranged lead, and – part vocal harmony lines to many of the Great American Songbook standards. Be transported as they meld two distinctly different vibes- one of a gypsy campfire, the other a slick metropolitan nightclub- into a cohesive, stylish sound.

Since the 2012 release of their all instrumental debut album “The Black Market Trust,” a milestone in the genre of gypsy jazz, the band has gone on to record two more albums, maintain a busy touring schedule, and have their music featured on TV shows like the ABC television series “Happy Endings” and the Hulu original program “Casual.”

The band features the Django Reinhardt inspired gypsy sound of acoustic instruments, and infuses classics from the Great American Songbook with intricate vocal harmonies inspired by The Beach Boys, and other artists influential to the group. Their sophomore album “II” featured a Top Ten hit on the Adult Contemporary charts, a signature version of “Route 66”.

The Black Market Trust, having played in Sedona the last three years, is setting out on their 2019 tour, with Sound Bites Grill being their first destination before heading to Tucson and then off to New Mexico.

The lead guitarist Jeffrey Scott Radaich has gained notoriety for his songwriting, as well as his technical prowess and musicality. He has been touted as one of the most innovative and influential American acoustic gypsy jazz guitarists today.

Tickets for the evening are $15 to $35 (VIP Seating). There is also a dinner package option of a 3-course pre-fixed menu for an additional charge or you may order off the regular menu.  The venue serves until 10 PM on Saturday and until 9 PM on Sunday. Doors open at 5:30 PM both evenings. Not attending the concert you may sit in their main dining room or patio.

Sound Bits Grill is located at the Hyatt Pinon Pointe Shops in Sedona. The entertainment restaurant is open for lunch and dinner daily at 11:30 AM. The restaurant has separate dining areas for guests that do not attend the shows. They serve dinner until 9 PM every night and till 10 PM on Friday and Saturday nights. For more information and full calendar of events visit SoundBitesGrill.com or call 928-282-2713