Cottonwood AZ (December 31, 2015) – UPDATE – THIRD SUSPECT IN CUSTODY – The third suspect in this case has been identified as 21-year-old Mac Cauich of Cottonwood. YCSO detectives discovered today that Cauich had turned himself in to the Camp Verde Detention Center on December 29th for an unrelated charge. Detectives interviewed him today at the jail and he admitted involvement in the burglary with assistance of Palomino and Perkins. Cauich was charged with Burglary, Trespass, Theft and Unlawful Use of Means of Transportation – he remains in-custody and bond has not been set.

Detectives have confirmed all 3 suspects were in the victim’s home and participated in the burglary. Detectives are continuing to investigate any possibility of additional criminal activity involving these suspects.

Cottonwood AZ (December 29, 2015) – On December 28, 2015, at approximately 8:30AM, YCSO deputies were dispatched to the 1400 block of Rocky Knolls Trail, Cottonwood, regarding a burglary just occurred. Deputies noted the 32-year-old resident/victim looked shaken as he explained that while home with his girlfriend, an unknown male opened their bedroom door. They did not recognize the man who, when he saw them, ran from the home and into the driver’s seat of a teal colored station wagon with a male passenger seated inside. The victim checked around his home and found a large screen TV had been stolen from the living room. 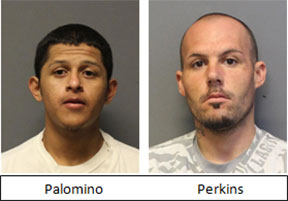 A bulletin was issued to area deputies and surrounding police agencies describing the suspects and their vehicle. About 20 minutes later, a YCSO Animal Control Officer (ACO) spotted the suspect’s station wagon, containing 3 occupants, exiting Zalesky Road onto the 89A in Cottowood. After the ACO alerted area law enforcement units by radio, nearby Cottonwood Police Officers arrived quickly to search and found the vehicle in the back parking lot of a nearby Best Western Hotel. As the officers approached, the 3 male occupants fled on foot. The stolen TV was found inside the station wagon.

Two YCSO deputies later spotted one of the suspects after he jumped into an irrigation ditch full of water. He was caught and identified as 20-year-old Alex Palomino of Cottonwood. Officers from the Cottonwood Police Department eventually located 27-year-old Gregory Perkins of Cottonwood. Perkins matched the description of the suspect seen entering the victim’s bedroom.

Both Palomino and Perkins were arrested for involvement in the burglary and booked at the Camp Verde Detention Center on charges including Burglary, Trespass and Theft. Deputies are working to confirm the identity of a third suspect and expect an arrest soon. Palomino remains in-custody on a $3500 bond and Perkins on a $7500 bond. Detectives have determined the suspect vehicle was stolen. As a result, additional charges are pending.