June 28, 2014No Comments
Facebook Twitter Pinterest LinkedIn Email Reddit WhatsApp
Share
Facebook Twitter LinkedIn Pinterest Email Reddit WhatsApp
Sedona AZ (June 28, 2014) – Stuck in Kathmandu is an epic musical adventure through the majestic, mystical land of Nepal. A young American traveler embarks on a journey to bring her grandfather’s ashes to one of the most beautiful places in the world, “The Valley of Flowers” in India. During her journey, she gets stranded in the ancient city of Kathmandu, Nepal. Embraced by the locals and guided by the magic of synchronicity, she discovers true beauty within herself, and the interconnectedness of all things, as she strives to reach her destination. Along her journey she was led to NAG orphanage where she recently returned to bring the Musical Circus to all the children, and this new footage will also be shared at the screening. 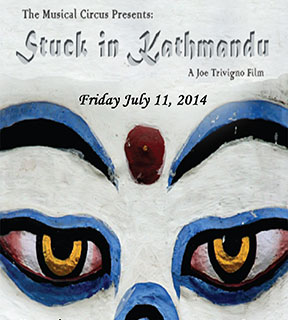 This is Briana Kai’s first full length documentary featuring her narrative writing, although she can seen as part of the cast of the documentary “11 Miles to Paradise” directed by the same filmmaker Joseph Trivingo. She began her education at UCSB taking courses on Buddhism, Hinduism and Exercise Wellness, and continued her studies aboard in the “college of life.” The creation of “Stuck in Kathmandu” began in 2009 and was completed in 2010. Other than being a yoga teacher and writer/filmaker, Briana is an accomplished singer/songwriter and dancer, having toured dancing in Europe and singing along side Jamaican Reggae Legend Junior Reid in his west coast and Hawaiian tour.
The film will be showing on Friday July 11, 2014 at Unity of Sedona, in the Sanctuary Room.  The film will begin at 7pm and tickets are $10.
documentary "Stuck in Kathmandu"