Sedona AZ (April 14, 2016) – The Stratford Festival’s renowned new production of “Hamlet” makes its Sedona big-screen debut on Sunday, April 24. The Sedona International Film Festival hosts the high-definition premiere from its home in Canada’s prestigious festival. There will be one show at 3 p.m. at the festival’s Mary D. Fisher Theatre.

A ghostly visitor with a shocking secret, a daughter devastated by loss, a deadly duel and the most famous question in all of drama: Shakespeare’s iconic tragedy will hold you spellbound.

“Hamlet” has been called the greatest play in the English language and this production from the world-renowned Stratford Festival “the most complete, most fulfilling, most satisfying in decades of theatre-going.” Jonathan Goad is witty and courageous in the title role, but also deeply human. The film excites and surprises at every turn, with a cast of some of the finest classical actors in the world bringing to life the most intense and heart-breaking relationships the stage has ever seen. 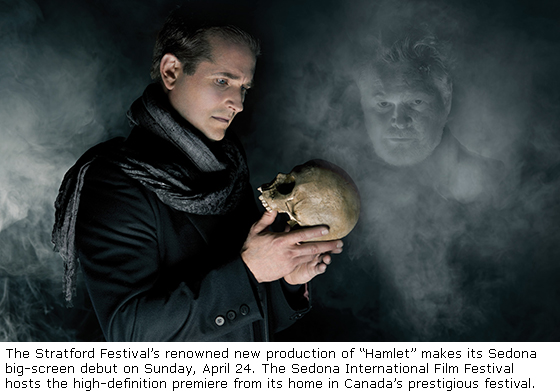 Since the recent death of old King Hamlet, Denmark has been adjusting to the new regime of Claudius, the late king’s brother, and preparing for an anticipated conflict with Norway. On the battlements of the royal castle at Elsinore, the sentries are on edge – and not just because of the threat of war. Twice now, a spectral figure resembling the old king has appeared to them on their nightly watch.

Meanwhile, young Prince Hamlet remains in deep mourning for his father, his grief compounded by disgust at the speedy remarriage of his mother, Gertrude, to his uncle, Claudius – a union that Hamlet considers incestuous. But even more anguish is in store when Hamlet discovers the truth about his father’s death – and finds himself cast in the role of avenger.

“Hamlet” will be shown at the Mary D. Fisher Theatre on Sunday, April 24 at 3:00 p.m. Tickets are $15, or $12.50 for Film Festival members. Tickets are available in advance at the Sedona International Film Festival office or by calling 928-282-1177. Both the theatre and film festival office are located at 2030 W. Hwy. 89A, in West Sedona. For more information, visit: www.SedonaFilmFestival.org.