The concert will feature Celtic and new world music for an entertaining and enchanting evening to celebrate St. Patrick’s Day and the earliest traditions of winter turning to spring.

Arvel Bird traces his roots to Celtic and Native musical styles to offer lively fiddle tunes and cedar flute songs, accompanied by his life partner Kimberly Kelley on the Irish bodhran and percussion.  Earth Speak’s music is devoted to the natural environment and the miracle of Earth’s planetary biosphere.  ‘Earth Speak’ is connected to the rich oral tradition of our indigenous and contemporary ancestors and our mutual engagement in communicating with the plant, animal and elemental worlds.

In many cultures, the March Equinox marks a time of transition and new beginnings. The Spring Equinox is the beginning of the ‘light’ half of the year where the sun is strongest and the days are longer than the nights. Indigenous cultures for thousands of years have celebrated through music and ritual the beginning of spring and new fertility and growth.  St. Patrick’s Day grew out of these ancient traditions and was initially associated with the ‘Green Man’ an ancient Celtic symbol.

In Celtic mythology, the Green Man represents the god of spring and summer when vegetative or plant growth is at its height. He disappears and returns year after year, century after century, enacting the spiritual themes of death and resurrection, the ebb and flow of life and creativity.

Arvel Bird, named by the prestigious Cowboy and Indian Magazine, as one of the top 4 favorite Native American Musicians, is a violinist, flutist and composer who brings to life the dramatic connection between Native American and Celtic traditions, stirring up scenes that echo from North American memory. 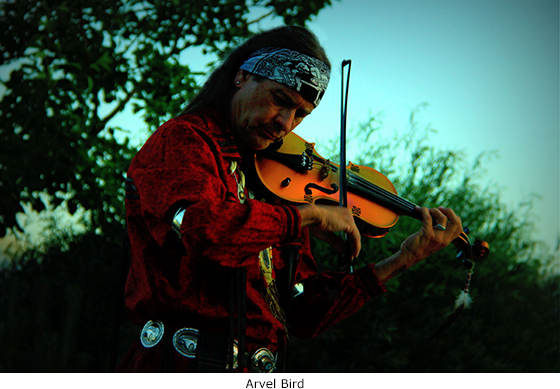 Arvel has won the coveted title of Artist of the Year at the Native American Music Awards (Nammys), followed by the Best Instrumental Album at the Canadian Aboriginal Music Awards (Cammys) among others. Arvel has played with such top country stars as Glen Campbell, Loretta Lynn, Ray Price, Louise Mandrell, and many more.

For the past 13 years Arvel and his wife and musical partner Kimberly Kelley have toured across the U.S. and internationally, and recently they’ve made Cottonwood their home with the founding of Center of Universal Light.  Kimberly brings harmony vocals, keyboards and bodhran to this evening of music. 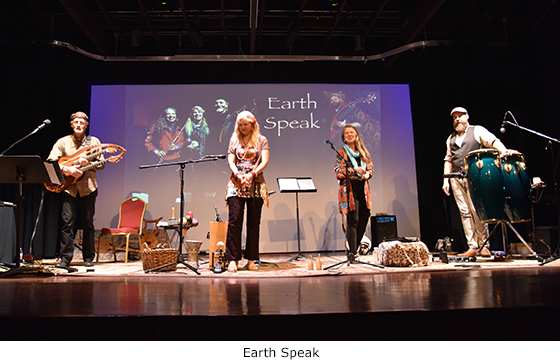 Visionary Guitarist William Eaton is acknowledged as one of the world’s great designers and builders of unique guitars and stringed instruments. He is a four-time GRAMMY nominee, NAMMY (Native American Music Awards) winner, and long time recording artist for Canyon Records. William is a founder and Director of the Roberto-Venn School of Luthiery, in Phoenix, AZ.  In 2015 he received the Arizona Governor’s Arts Award in the ‘artist’ category.  William is also a founder and co-director of Old Town Center for the Arts.

Classically trained, jazz influenced and world music inspired, Claudia Tulip performs on silver and ethnic flutes, and panpipes.  One reviewer commented, “Claudia’s sound is a beautiful blend of imagination, deft technique and soulful expression.”  Claudia has enjoyed a successful solo career and has also been a member of the William Eaton Ensemble since 1988.

With an ability to sing in several different languages and to improvise fluidly, vocalist Susannah Martin brings worlds of experience in vocal styles. She wails on R&B or Rock tunes, delivers a touch of sultry jazz, vocalizes soothing ragas melodies, and can sing fluently in Spanish and Brazilian Portuguese. Susannah also adds a groovy beat on cajón and hand percussion.

Bart Applewhite toured nationally with the band Kongo Shock. He is a graduate, and now administrator, of the Roberto-Venn School of Luthiery, in Phoenix, Arizona, where he designs and builds one-of-a-kind bass harp guitars and is perhaps the only builder and player of these hybrid instruments in the world.

Join these talented performers to usher in the springtime in recognition of the Spring Equinox and St. Patrick’s Day.

Tickets for the St. Patrick’s Equinox Concert are $20 in advance, $22 at the door, and $25 priority seating.  Tickets are available online at www.showtix4u.com, in Cottonwood at Desert Dancer and Mount Hope Natural Foods; and in Sedona at The Literate Lizard.  Old Town Center for the Arts is located at 633 N. 5th Street (5th Street & Main) in Old Town Cottonwood. For more information please visit oldtowncenter.org or call Elena Bullard at 928.634.0940.