Flagstaff AZ (March 29, 2017) – Everyone knows spring follows winter, which means mud season follows snow season. Many roads in the Coconino National Forest are still closed until the snowbanks melt and the soil dries out.

This year the Coconino NF has numerous people ignoring closed gates and bypassing or destroying them to access the soft and muddy forest roads. The vandalism of the forest gates is three to four times more this year than in previous years, according to Forest Service law enforcement and local Arizona Game and Fish patrols.

Not only can ignoring gates be extremely dangerous and extremely damaging to the land, it is illegal. It is unlawful to operate a vehicle on, or off-road, in a manner which damages or unreasonably disturbs land and vegetation. This is a Class B misdemeanor which could result in a $5,000 fine and/or imprisonment of up to 6 months.

“We have assisted multiple stranded motorists, some with families, on the closed forest roads, some of which entered the forest not knowing the gate had been illegally opened by the public,” said Officer Andy Pederson, Forest Service law enforcement officer.

Forest Service law enforcement officers are working with district personnel and have tabulated the amount of damage to forest property and observed circumvention of the gates to gain access to the closed Forest Road System:

“There are still patches of snow along many roads,” said Mike Duncan, deputy district ranger, Mogollon Rim Ranger District. “Road damage and ruts occur if they’re driven on. We’re asking drivers to be patient a few weeks longer until roads dry out and become firm.”

After a wet winter, soils are still saturated, especially in shady areas and along north-facing slopes. Roadbeds can’t support the weight of vehicles, resulting in deep ruts and ever-widening road surfaces. 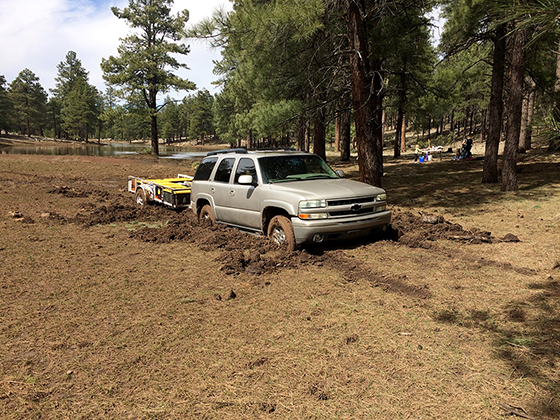 Many non-motorized trails are muddy and the Coconino NF would prefer recreational users choose more hardened trails until ground conditions change. Horse, bike, and foot traffic during muddy conditions can cause trail damage, including rutting and potholes that will require costly rehabilitation. These types of forest activities destroy vegetation, expose soil to erosion, and leave scars upon the land that may last for years.

Some roads are damaged due to slides and washouts. With limited resources, funding and equipment, the Forest Service needs to focus on repairing road damage caused by winter storms rather than damage caused by users.  Temporary closures protect the investment in road maintenance. Where roads are closed to vehicular access, visitors can venture into the forest by non-motorized means. Forest Service patrols are reassessing road conditions daily, and roads will be opened as soon as practical. For a quick look at the road closures see http://tinyurl.com/roadstatus-cof .

The large Cinder Hills Off-Highway Vehicle Area north of Flagstaff is in excellent condition for dirt-biking and trail riding.  Lower elevation roads, such as those in the Red Rock Ranger District, are often ready for vehicle use several weeks before higher elevation roads are ready for use.

The public is encouraged to report all violations by calling the Flagstaff Forest Service dispatch center at (928) 527-3552 and requesting law enforcement support.