Sedona AZ (January 12, 2015) – Bringing awareness of a national problem home to the streets of Sedona and the Verde Valley, a group of local sportsmen and sportswomen have become real champions for mental health awareness. 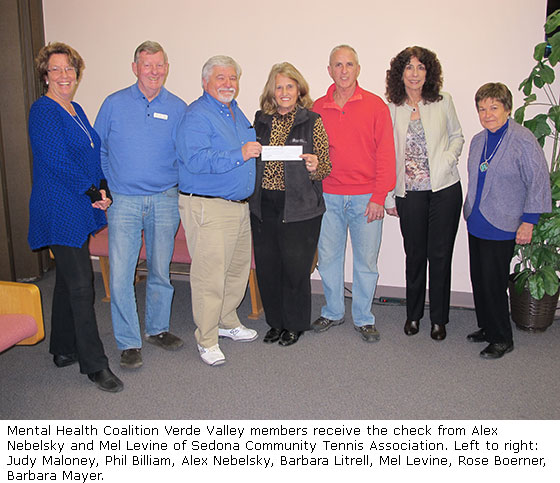 According to Nebelsky, after searching to support a local group dedicated to promoting mental health awareness, the SCTA selected the Mental Health Coalition Verde Valley to receive tournament proceeds. SCTA member Mel Levine also cited the need for raising social consciousness about mental health issues and resources as well as reaching out to people on a local level.

Accepting the donation for MHCVV, facilitator Barbara Litrell stated the group was formed in 2013 by a small group of residents and health professionals who participated in a community conversation about mental health issues in Arizona and locally. Since then, spearheaded by coalition member Rose Boerner, Director of NAMI Sedona and board chair of Spectrum Healthcare, the MHCVV has published a 32 page list of resources in the Verde Valley. In addition MHCVV has worked on mental health and criminal justice collaborations, and encouraged community members and first responders to participate in Mental Health First Aid classes offered by Spectrum Healthcare. The MHCVV also plans a broader mental health community conversation this year.