Sedona AZ (January 25, 2016) – On Sunday, January 17, 2016, at approximately 00:37 am Sedona Fire District (SFD) emergency crews were dispatched to a reported rescue in a remote area in the Coconino National Forest west of Bear Mountain. Crews worked through the night and were able to complete the rescue by about 5:30 am.  Initial crews arrived in challenging conditions that included difficult terrain, ice and cold weather that made it difficult to gain access to the site by foot and/or motor vehicles. 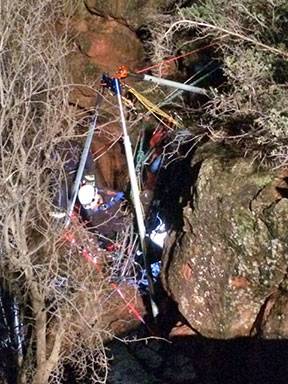 Bystanders reported that a male attempted to climb into a natural sinkhole using an old tree limb as a support, the tree limb broke during his descent causing the victim to fall approximately 20 feet. The victim landed on a rock ledge on the side of the sinkhole, which is approximately 50’ deep, 100’ wide, and 200’ long.

Arriving crews initiated a high angle rescue and began coordinating additional resources with the responding Duty Chief, SFD Battalion Chief Dave Cochrane. Crews set up a rappel system to gain rapid access to provide initial treatment to the patient. A SFD firefighter/paramedic rappelled into the sinkhole making patient contact, determining the patient sustained lower extremity injuries. Immediate care was given to the patient while the remaining responders set up the necessary technical rescue systems to complete the rescue. In total, 8 responders were needed to work the incident through the night and the patient was transported to a local hospital. Battalion Chief Cochrane, the incident commander on scene stated “While working in difficult conditions including cold overnight temperatures, limited lighting and with minimal rest, all personnel remained focused on safety and patient care as their primary goals. Everyone worked flawlessly and the outcome is directly related to the training SFD crews do on a daily basis to be prepared. I am proud of the crews and the work they do every day but especially on the extremely dangerous calls like this.”