Sedona AZ (March 17, 2016) – The Sedona International Film Festival is proud to present the Northern Arizona premieres of “Youth” (featuring an all-star, award-winning ensemble cast) and “Aferim!” (the best-reviewed film of the season) showing March 25-30 at the Mary D. Fisher Theatre. 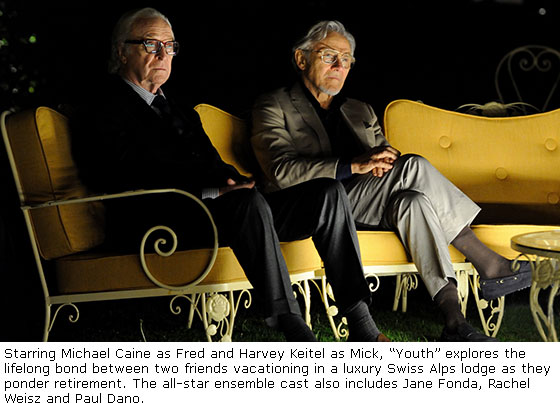 From Paolo Sorrentino — the internationally renowned writer and director of Italy’s Oscar-winning foreign language film “The Great Beauty” — comes “Youth”.  Starring Michael Caine as Fred and Harvey Keitel as Mick, “Youth” explores the lifelong bond between two friends vacationing in a luxury Swiss Alps lodge as they ponder retirement. While Fred has no plans to resume his musical career despite the urging of his loving daughter Lena, Mick is intent on finishing a screenplay in what may be his last important film for his muse Brenda.

Set against a sprawling landscape of unforgettable sights and intoxicating music, “Youth” asks if our most important and transformative experiences can come at any time — even late — in life.

Critics are raving about “Youth”. “Every performance from the outstanding ensemble cast rings true. Even the supporting players are superb!” raves Sandy Cohen from the Associated Press. “A total winner! Funny, philosophical and moving!” says Steven Zeitchik from the Los Angeles Times. “ ‘Youth’ is superior cinema! Ardent and artful, hypnotic and haunting,” says Peter Travers from Rolling Stone.

“Afferim!” is the best-reviewed film of the season by critics and audiences alike, garnering a 100% Fresh rating from critics on RottenTomatoes.com.

“Hugely entertaining…One of the best movies I’ve seen in a long time…I would not be surprised if this showed up on my best 10 list when we get to the end of the year.” — David Sterritt, Films in Focus

Eastern Europe, 1835. Two riders cross a barren landscape in the middle of Wallachia. They are the gendarme Costandin and his son. Together they are searching for a gypsy slave who has run away from his nobleman master and is suspected of having an affair with the noble’s wife. 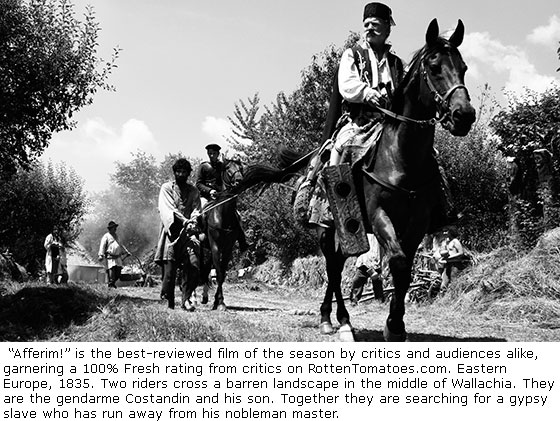 While the unflappable Costandin comments on every situation with a cheery aphorism, his son takes a more contemplative view of the world. On their odyssey they encounter people of different nationalities and beliefs: Turks and Russians, Christians and Jews, Romanians and Hungarians. Each harbors prejudices against the others which have been passed down from generation to generation. And even when the slave Carfin is found, the adventure is far from over.