Sedona AZ (April 13, 2018) – In honor and celebration of Earth Day, the Sedona International Film Festival is proud present a premiere of the award-winning new documentary “Love & Bananas: An Elephant Story” on Sunday, April 22 at 4 and 7 p.m. at the Mary D. Fisher Theatre.

“Love & Bananas: An Elephant Story” is a heartwarming and hopeful film that exposes the plight of Asian elephants and the people who work tirelessly to save them. 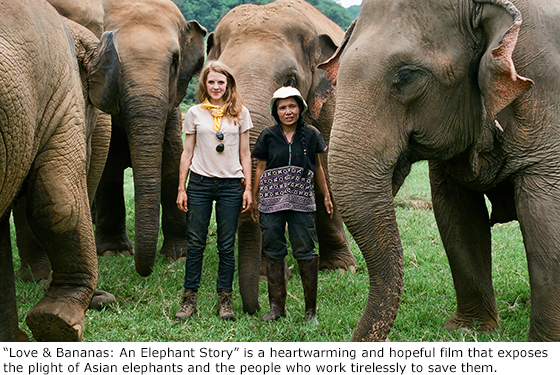 African elephants are slaughtered for their ivory, but sadly the plight of the Asian Elephant has been completely overlooked even though they are the elephant we are most familiar with in zoos, circuses and elephant rides. “Love & Bananas: An Elephant Story” exposes the cruel secret that every Asian elephant has had to endure to become a service animal.

This heartwarming film aims to ignite a sense of hope, and a new way of thinking about this species.

“I was given the rare opportunity to join world-renowned Asian Elephant conservationist Lek Chailert as she set out to rescue an elephant from a trekking camp,” said actress and director Ashley Bell. “With a week’s notice, I assembled a crew of four, and we soon found ourselves on the back of a truck, barreling down the superhighway in Thailand with Noi Na, a 70 year old partially blind elephant battling heatstroke. It was my job to chronicle this heart stopping and dangerous rescue without becoming part of its success or failure.”

“We stayed on the sanctuary to capture Noi Na’s tenuous assimilation into the herd. We woke when the elephants woke to document the spirit of the herd, free of chains, which allowed them to be who they truly are — elephants,” added Bell. “Because Lek opened not only her doors, but her heart, we were granted unparalleled access to these giants. Lek showed me her world. It was my job and responsibility to show the world hers.”

“Love & Bananas: An Elephant Story” will show at the Mary D. Fisher Theatre on Earth Day, Sunday, April 22 at 4 and 7 p.m. Tickets are $12, or $9 for Film Festival members. For tickets and more information, please call 928-282-1177. Both the theatre and film festival office are located at 2030 W. Hwy. 89A, in West Sedona. For more information, visit: www.SedonaFilmFestival.org.