Sedona AZ (May 1, 2018) – The Sedona International Film Festival is proud present a one-night only special premiere of the new romantic comedy “Keep the Change” on Tuesday, May 8 at 4 and 7 p.m. at the Mary D. Fisher Theatre, presented in partnership with the Jewish Community of Sedona and the Verde Valley.

A New York City romantic comedy, “Keep the Change” is the unlikely love story of two people who meet in a support group. While David (Brandon Polansky), an upper-class charmer, wants nothing to do with this world, Sarah (Samanta Elisofon) fully embraces her individuality. When paired on an assignment to take a field trip over the Brooklyn Bridge, David is less than enthused. But what he doesn’t realize is that this quirky bundle of energy just might hold the key to his happiness. 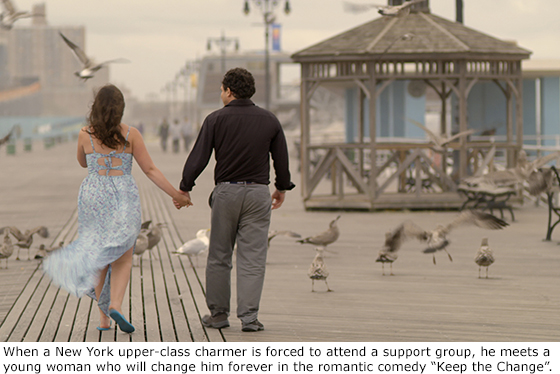 Their budding relationship must weather Sarah’s romantic past, David’s judgmental mother (Jessica Walter), and their own pre-conceptions of what love is supposed to look like.

“Keep the Change” does something quite radical in casting actors with autism to play characters with autism, offering a refreshingly honest portrait of a community seldom depicted on the big screen. Rarely has a romantic comedy felt so deep and poignant. Thoroughly charming and quite funny, the film’s warmth and candor brings growth and transformation to the characters, and ultimately, to us.

“A landmark motion picture. It deserves to be widely seen.” — Glenn Kenny, The New York Times

“Keep the Change” will show at the Mary D. Fisher Theatre on Tuesday, May 8 at 4 and 7 p.m. Tickets are $12, or $9 for Film Festival members. For tickets and more information, please call 928-282-1177. Both the theatre and film festival office are located at 2030 W. Hwy. 89A, in West Sedona. For more information, visit: www.SedonaFilmFestival.org.